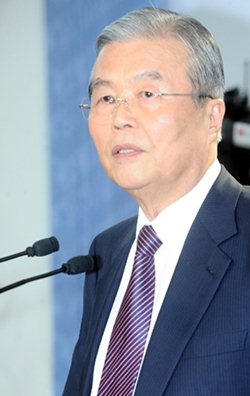 A key member of the Saenuri Party’s emergency leadership council stepped down yesterday, declaring there was no role left for him to play in supporting the conservative ruling party’s campaign for the next month’s legislative elections.

Kim Chong-in, a former senior economic affairs secretary of the Roh Tae-woo Blue House, was recruited by Park Geun-hye, the interim head of the Saenuri Party, in December to join the ruling party’s emergency leadership council. The 71-year-old former four-time lawmaker, however, held a press conference yesterday to declare his intention to step down from the post.

“Because the party launched the legislative election campaign committee, I decided to end my service as an emergency council member as of today,” Kim said. “I decided to leave because I have fulfilled my duty and there are no more roles I can play.”

Kim said he wanted to leave the council when the party launched the nomination review committee on Jan. 31, but Park asked him to stay longer. He said his resignation was postponed to the end of February and then again to yesterday. 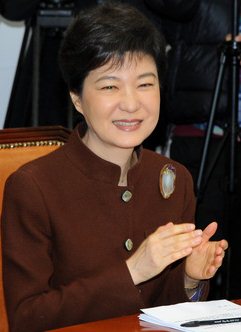 “There is nothing I can do to help during the campaign period,” Kim said, asked about that he will do in the future. “I will make a decision depending on the situation after the election.”

Asked if he will join the presidential campaign of the Saenuri Party to back Park, Kim said “I will decide that when the time comes.”

Kim said he told Park on March 1 about his decision to step down. A senior Saenuri source said Kim has told Park that she must win the presidential election in December and he is willing to help her.

At the press conference, Kim showed concerns about the Saenuri Party’s nomination for the legislative elections.

“I don’t have complaints, but I thought the party should have paid more careful attention in selecting the candidates,” he said. “It would have been better for the party to carry out a drastic reform by recruiting fresh faces for the elections in order to solidify its leadership and to improve the reputation before the public.”

While praising Park for her prudence and gentle character, Kim said he differed in opinion with Park because she highly valued harmony within the party.

“I joined because the party pledged to carry out reform, but I realized after joining the Saenuri Party’s emergency leadership council that the reform was very weak,” he said, adding that Park was probably afraid that drastic measures would hurt the party’s unity.

While serving on the emergency leadership council, Kim’s strong push for reform has faced fierce resistance. His failed attempt to remove the term “conservatism” from the party’s platform and a campaign to promote “economic democratization” were protested by many senior members.

Speculations were high that Kim’s decision to resign was in protest of the party’s lack of efforts to nominate candidates capable of promoting his “economic democratization” agenda. Park, however, dismissed the argument yesterday.

“It is a key value of the Saenuri Party,” Park said yesterday. “We will make sure it will be implemented.”

Park also said she appreciated Kim’s role to save the party from the crisis, adding that he decided to leave because he thought the time had come with the launch of the campaign committee.

Asked about the Saenuri Party’s prospects in the legislative elections, Kim said yesterday the party will do better than its performance in 2004. “Park still managed to lead the party and won 121 seats in 2004 in the aftermath of the Grand National Party’s impeachment of President Roh Moo-hyun,” Kim said. “I think the Saenuri Party will have success if it wins more than 121 seats this time, and it probably will.”