Liberal parties’ marriage on the rocks

Liberal parties’ marriage on the rocks 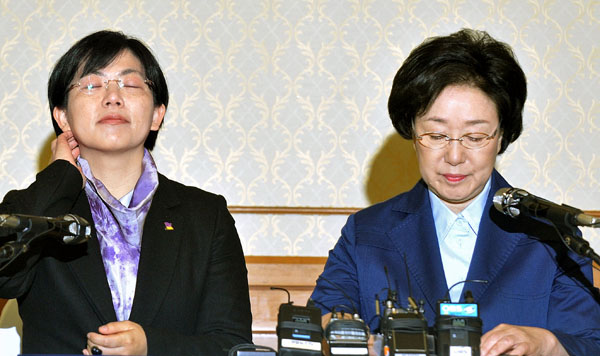 
The hard-won alliance between the Democratic United Party and the Unified Progressive Party is on the brink of a breakup over the growing fallout from the rigged primaries to consolidate their candidates in next month’s general election.

The Unified Progressive Party said yesterday that Representative Lee Jung-hee, its co-chairwoman, will register her candidacy today, making clear she won’t surrender her nomination to represent the liberal alliance in Seoul’s Gwanak B District.

Following revelations over the weekend that her staffers had rigged a telephone survey during the primary, Lee said earlier this week that she was willing to go through another primary against her DUP rival Kim Hee-chull, but refused to give up her nomination.

In protest of Lee’s decision, Representative Kim said he will leave the DUP and seek re-election as an independent candidate in his constituency.

After a series of failed negotiations, DUP Chairwoman Han Myeong-sook and UPP Chairwoman Lee struck a deal on March 10 to consolidate their candidates in 76 districts. Although the UPP claimed 11 victories, including Lee’s win in the primaries, the liberal alliance quickly faced a crisis as speculations rose that the surveys were rigged.

As the alliance seemed to be faltering, a group of liberal civic activists yesterday held a press conference and pressured Lee to drop out of the race. The group, Hope 2013, Victory 2012 Roundtable, had mediated the liberal alliance and overseen the primaries.

“People are demanding the UPP show its commitment and sacrifice for the liberal alliance,” the group said. “Lee must take responsible action for failing to respect the rules.”

“The principle of accepting the primary outcomes must be respected,” the group said.

They also urged the chairwomen of the two parties to meet and resolve the problem.

“The two parties’ leaders signed the alliance agreement,” the group said. “They must meet today with a determination to save the liberal alliance from the crisis.”

The DUP also continued to pressure Lee to give up her nomination. “The liberal alliance will remain strong,” Representative Kim Yoo-jung, spokeswoman of the DUP, said yesterday. “But the UPP must take responsibility for Lee’s scandalous victory.”

Criticism also mounted on DUP Chairwoman Han for her failure to resolve the situation. She canceled her official schedule yesterday as her efforts to persuade Lee to surrender her nomination and to persuade Kim Hee-chull to stay with the party both failed.

Another sign of a rift was also seen yesterday, as the DUP decided to go ahead and name Baek Hye-ryun as its candidate for Ansan-Danwon A District of Gyeonggi. Although Baek was defeated by the UPP’s Cho Seong-chan in the primary, the outcome was challenged due to a poor sampling of the survey. While Baek lost the race by three votes, the survey included responses of five people who belonged to a different constituency, the DUP said, challenging the legitimacy of the outcome.

“Although the primary management committee urged the two parties to discuss the issue and make an agreement, we failed to agree,” DUP spokeswoman Kim said yesterday. “So the DUP Supreme Council decided to nominate Baek.”

The UPP yesterday fiercely condemned the DUP’s decision. Rhyu Si-min, a co-chairman of the UPP, called it a deal breaker that will destroy the alliance.