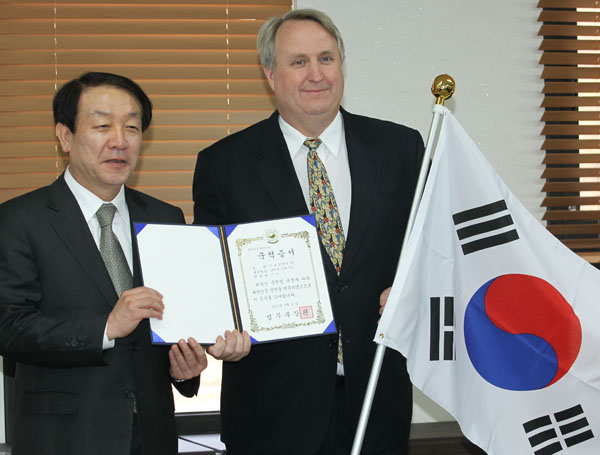 In Yo-han (John Linton), right, director of the Severance Hospital International Health Care Center, receives a certificate of Korean citizenship from Minister of Justice Kwon Jae-jin on Wednesday at the Government Complex in Gwacheon, Gyeonggi. In is the first foreigner to obtain Korean citizenship through his own contributions to society under the newly revised naturalization law. [YONHAP]

John Linton, also known as In Yo-han, director of the Severance Hospital International Health Care Center, has become a naturalized Korean citizen, recognized for his contribution to public welfare.

He received the certificate of Korean citizenship from Minister of Justice Kwon Jae-jin on Wednesday at the Government Complex in Gwacheon, Gyeonggi.

Though there have been some cases in which foreigners have received citizenship due to their ancestors’ contribution to Korean society, In is the first to have obtained citizenship through his own contributions under a recently revised law that now permits dual citizenship. The 53-year-old is a descendent of an American missionary family that, for four generations, has contributed to the development of Korean society.

“I am overwhelmed with emotion that I finally became a Korean citizen,” In said. “I want to spend my old age and be buried in my hometown, Suncheon, [South] Jeolla.”

In’s great-grandfather, Eugene Bell, was dispatched to Honam Province as a missionary in 1895. His grandfather, William Linton, participated in an anti-Japanese movement during the Japanese colonial period and established schools in Korea. He founded Hannam University in Daejeon.

Hugh Linton, In’s father, participated in the Korean War, taking part in the Battle of Incheon, an important amphibious assault commanded by Gen. Douglas MacArthur in 1950. He also built several antituberculosis dispensaries and sanatoriums to eradicate the disease. He died in a car accident in 1984.

This accident was one of the key inspirations for In to develop a new type of ambulance in Korea, which can drive through narrow alleys, because his father passed away while being transported to a hospital by taxi without any emergency medical treatment.

In has visited North Korea 26 times since 1977 with his older brother, Stephen Linton, 62, who is also known as In Se-ban, to fight tuberculosis. Through these activities, the two brothers received the Order of Civil Merit Magnolia Medal from the government in 2005.

In now holds dual citizenship in the United States and South Korea as permitted under the new naturalization law.

Still, In emphasized that his hometown is in Jeolla and his spirit belongs to Korea.