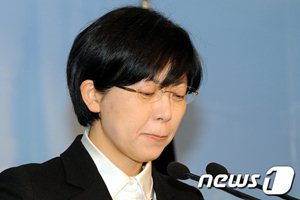 Representative Lee Jung-hee, co-chairwoman of the Unified Progressive Party, abandoned her race for the National Assembly after being accused of rigging a primary, which will possibly save the alliance between her party and the Democratic United Party.

The UPP said Friday that Lee will hold a press conference in the afternoon to announce her decision to bow out from the race.

The alliance between the two liberal political parties was on the brink of collapse over the fallout from the rigged primary, in which Lee's staffers allegedly asked respondents to a telephone survey to lie about their ages to boost her score.

But with Lee's pull-out, the two parties will be able to maintain their coalition to compete against the ruling Saenuri Party in the April 11 general election.

Following revelations of the survey rigging during the primary in Seoul's Gwanak B District, Lee said earlier this week she was willing to contest another primary against her DUP rival, Kim Hee-chull, but refused to give up her nomination.

Kim held a press conference to announce his departure from the DUP and registered his candidacy to run independently in the constituency.