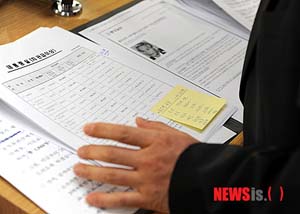 President Lee Myung-bak and first lady Kim Yoon-ok saw the value of their personal assets rise by about 300 million won ($265,240) last year after half a million dollars was added from the cash award that came with an environment prize Lee won overseas, government data showed yesterday.

The first couple’s assets totaled about 5.8 billion won, compared with about 5.5 billion won in 2010. The increase was made because Lee won $500,000 in prize money when he was awarded the Zayed International Prize for the Environment from the United Arab Emirates in March last year, according to the data.

Lee plans to use the prize money for environmental causes, sources said.

The values of other assets of Lee and the first lady remained largely unchanged, including the private house in Nonhyun-dong in southern Seoul, where Lee plans to move after leaving office early next year, as well as the first lady’s 1.07-carat diamond and some art pieces.

The asset disclosure was made under an anticorruption law that requires senior government officials, lawmakers, heads of municipalities, members of local legislatures and senior judges to report their personal assets every year to ensure there is no ill-gotten wealth.