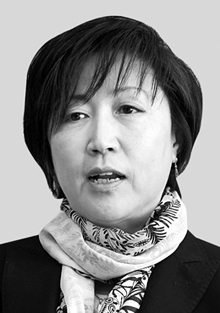 Lee Jean-young, a professor at Ewha Womans University’s Graduate School of Translation and Interpretation, boasts a unique career. As a veteran translator that has been involved with more than 1,700 big and small conferences, including the 2010 Seoul Group of 20 Summit, Lee is well aware of the different styles of speech world leaders hold.

“United States President Barack Obama uses a lot of modifiers [in his speech] and focuses on practicality, while Chinese President Hu Jintao’s speech is persuasive and touches the core,” she said in a recent interview. Lee, 55, is the daughter of Lee Beom-seok, Korea’s former foreign minister who was one of the victims of the Rangoon bombing, an assassination attempt against then-President Chun Doo Hwan in 1983, and wife of Cho Tae-yong, the current Korean ambassador to Australia.

Based on her abundant experience as a translator, she has taken the role of a consultant interpreter for the upcoming Nuclear Security Summit. A total of 18 languages will be used during the two-day summit, and Professor Lee will be in charge of arranging and assigning translators work.

“The language major leaders use bears the stamp of philosophy, character and intellectual ability,” she said, noting that as a Korean, she would like to contribute to expanding the translation industry based on her experience of arranging translations for big events.

For the upcoming Nuclear Security Summit to be held at COEX in Samseong-dong, southern Seoul, three translators will be in charge of translating each of the 18 languages. In other words, 54 translators will be the ears and mouths of the 58 leaders participating in the summit.

Along with Lee, translators that have been chosen to take part in the summit work have been studying vocabulary lists of hundreds of words related to the issue of nuclear security and safety.

Being a translator may seem like an elegant and fancy career, however, Lee says the job itself is nerve-racking.

“Whenever I have translation work, I don’t put on makeup and I dress comfortably in jeans and flat shoes,” the professor said. “Being quick is also important because we need to move from one place to another, for example, from the banquet ballroom to the meeting room as quick as lightning.”

“Being a translator is like being an artist,” she said.