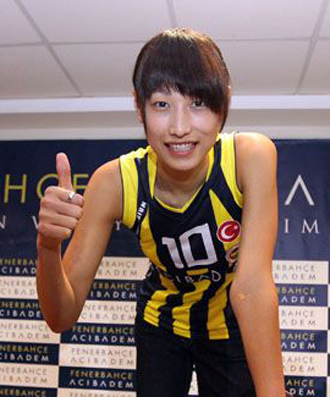 For Kim, the tournament puts her one step closer to being a global star of the sport. The 24-year-old was not only the tournament MVP, but also the top scorer and spiker. In 12 Champions League matches (40 sets), Kim bagged 228 points with 193 spikes, taking No. 1 in both categories. She also ranked fourth in serves with 18 aces.

Kim signed with Fenerbahce last June and became the first Korean female volleyballer to play in Europe since Cho Hye-jung went to Italy in 1979. Heading to Europe was a good challenge for the 192-centimieter (six-foot, four-inch) tall player after she had amassed so much success in Korea and Japan.

Kim moved to Japan in 2009 after signing with JT Marvelous. She led the team to the regular season championships in her Japanese debut season and became the top scorer. She was named Japanese V-League MVP last year, before heading to Turkey.