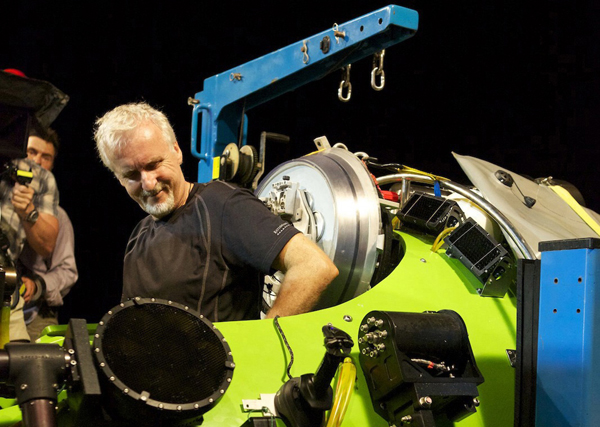 The director of “Titanic,” “Avatar” and other films used a specially designed submarine to dive nearly seven miles. He spent time exploring and filming the Mariana Trench, about 200 miles southwest of Guam, according to members of the National Geographic expedition.

Cameron returned to the surface of the Pacific Ocean on Monday morning local time, Sunday evening on the U.S. East Coast, according to Stephanie Montgomery of the National Geographic Society.

He spent a little more than three hours under water after reaching a depth of 35,756 feet before he began his return to the surface, according to information provided by the expedition team. He had planned to spend up to six hours on the sea floor.

Cameron’s return aboard his 12-ton, lime-green sub called Deepsea Challenger was a “faster-than-expected 70-minute ascent,” according to National Geographic.

There were no immediate reports regarding Cameron’s well-being. A medical team was present when Cameron, 57, emerged from the sub. Expedition physician Joe MacInnis told National Geographic News before the journey that recent test dives, including one that went more than five miles deep, had gone well and that he expected Cameron would be fine.

“Jim is going to be a little bit stiff and sore from the cramped position, but he’s in really good shape for his age, so I don’t expect any problems at all,” said MacInnis, a long-time Cameron friend, according to National Geographic.

The scale of the trench is hard to grasp - it’s 120 times larger than the Grand Canyon and more than a mile deeper than Mount Everest is tall.

“It’s really the first time that human eyes have had an opportunity to gaze upon what is a very alien landscape,” said Terry Garcia, the National Geographic Society’s executive VP for mission programs.

One of the risks of a dive so deep was extreme water pressure. At 6.8 miles below the surface, the pressure is the equivalent of three SUVs sitting on your toe.

Cameron told The Associated Press in an interview after a 5.1 mile-deep practice run near Papua New Guinea earlier this month that the submarine would implode in an instant if it leaked.

But while he was a little apprehensive beforehand, he wasn’t scared or nervous while underwater.

“When you are actually on the dive you have to trust the engineering was done right,” he said.