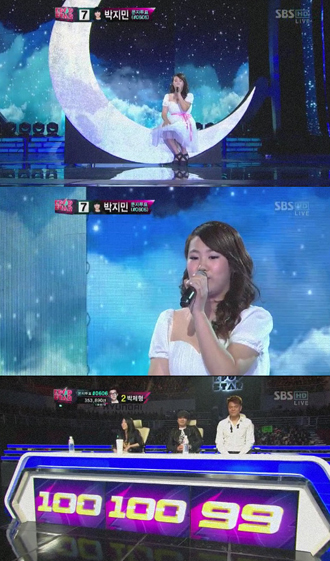 Singing-audition show “K-pop Star” contestant Park Ji-min gave a recital that sent shivers down BoA’s spine and induced BoA’s fellow judge Park Jin-young to say he wanted to “pack her in a bag and take her to his management company.”

With her rendition of “Over the Rainbow” on March 25, Park was awarded 299 points out of a possible 300 points – 100 points from BoA, 100 points from music producer Yang Hyun-suk and 99 points from Park, achieving the highest score ever attained by a contestant on the show.

Park also shed tears of joy at the praises and secured herself a spot on the top six contestants list.

Others to have made it onto the list are Michelle Lee, Park Jae-hyung, Lee Hi, Baek Ah-yeon and Lee Seung-hoon. Park is the youngest of the contestants at just 15 years of age, while the oldest is Michelle Lee, at 21 years.

The contestants will now battle it out in order to become the next K-pop star. The winner will receive a prize of 100 million won ($87,654) and an additional 200 million won to produce a debut album with YG, JYP or SM entertainment agencies.