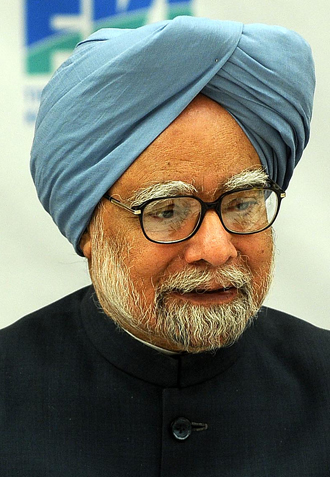 The signing of an agreement between the countries came ahead of the two-day Nuclear Security Summit. The agreement also mentioned the importance of maintaining peace and stability on the Korean Peninsula and “urged that nothing should be done which increases tensions in the region and violates the relevant UN resolutions.”

President Lee cited Singh’s remark in an interview with the JoongAng Ilbo published on Friday, in which he described India as a sleeping elephant, “slow to move at first, but once it starts to move, nobody can stop it.”

Lee said he agreed with the description, and Singh was pleased.

The JoongAng Ilbo recently conducted the interview with Singh in his office in New Delhi. Through the reporter, President Lee sent a letter to Singh sending his regards. In the interview, Singh referred to Lee as his “good friend” and spoke of the opening of India’s economy, the Nuclear Security Summit and the Korea-India relationship.

In 1991, Singh was India’s finance minister at a time of economic crisis and pioneered policies to liberalize its economy. He went on to become prime minister in 2004 and was re-elected for a second five-year term in 2009.

Excerpts from the interview:

Q. Since 1991, you have championed an open market and economic reform. You must have faced tough resistance at that time.

A. In human affairs, the status quo has a great appeal because it is rooted in reality. And therefore, whenever you want to change the status quo, there is resistance. But I have great faith in the people of our country, and it is because of the support of the people that we were able to get the people out of a deep economic crisis in 1991 to 1996. Since 1991, there are several parties that have ruled the country. This change in political leadership has not affected the process of economic reforms so underlying there is a great national consensus in favor of the liberalization process.

During the Nuclear Security Summit when you meet President Lee Myung-bak, what will you want to bring up the most?

We must work together to give depth and greater meaning to our comprehensive economic partnership agreement, strengthen the people-to-people context between our two countries and cooperation in the field of science and technology, and also coordinate our thinking in matters relating to regional security, international events. I would be happy to exchange views with President Lee and other great leaders assembled in Seoul as to how we can work together to promote nuclear security and safety in this world in which we live.

China and the United States are the new Group of Two, wielding great influence in international affairs. Have you faced situations where you were forced to choose between China and the U.S.?

India enjoys mutually beneficial and productive relations with both China and U.S.A. China is our largest neighbor, with which we share a long border. It is also our biggest trading partner in goods. With the U.S., our relations have been transformed in recent years. In 2005, we established a global strategic partnership that has led to the development of truly multifaceted relations. Three million people of Indian origin live and work in the U.S. The country is also India’s largest business partner, including trade in both goods and services. Our aim is to have cooperative ties with both China and U.S. It is not a zero-sum game. I do not think that large and dynamic countries like China can be contained, and I have often said that the world provides all of us enough space to grow and realize our development ambitions.

What is your image of the past, present and future of Korea?

The Republic of Korea’s transformation and its emergence as a vibrant democracy, one of the fastest-growing economies in the world and a powerhouse of innovation in just two generations is an inspiration for the whole of Asia. I am aware of the odds you fought against and the sacrifices you made in the early years of building your nation to gain the prestige and position you enjoy today. It is a reflection of your enlightened leadership and the resolve of the South Korean people. I am confident that the Republic of Korea will play an increasing role in international affairs and that India-South Korea relations will grow from strength to strength as we take forward our strategic partnership.