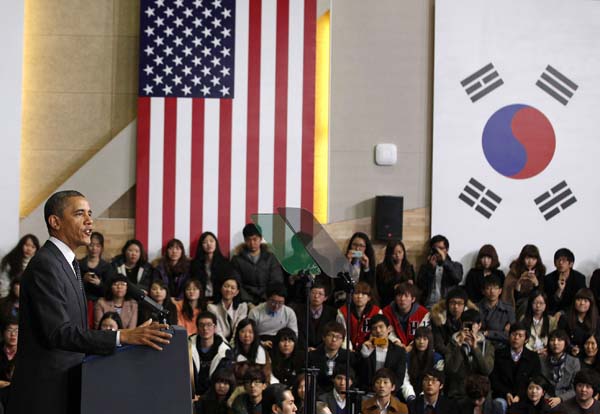 U.S. President Barack Obama delivers a speech at the Hankuk University of Foreign Studies before attending the 2012 Nuclear Security Summit later in the day in Seoul yesterday. He is the first incumbent U.S. president to speak to college students on a campus in Seoul. [REUTERS/YONHAP]


Amid heightened security ahead of the Nuclear Security Summit which runs until today, United States President Barack Obama spoke to Korean students yesterday morning on a Seoul campus, the first incumbent U.S. president to do so.

In his third visit to the South Korean capital, Obama addressed some 700 students of the Hankuk University of Foreign Studies (HUFS), several hundred of its faculty and press in the school’s Minerva Complex auditorium in Imun-dong, Dongdaemun District, northern Seoul.

He spoke of South Korea’s role in the global community, calling Korea “one of the world’s most dynamic economies,” and the “urgent work of preventing nuclear terrorism by securing the world’s nuclear materials” that needed to be addressed at the summit.

The U.S. president opened by acknowledging that it was the two-year anniversary of the Cheonan sinking, then stated his broader comprehensive nuclear disarmament agenda and issued a warning against countries who continue to challenge international security.

Obama warned North Korea that “there will be no rewards for provocations” regarding its pursuit of nuclear weapons.

“I want to speak directly to the leaders in Pyongyang,” he said. “The U.S. has no hostile intent to your country .?.?. but by now, it should be clear your provocations and pursuit of nuclear weapons have not achieved the security you seek.”

He stated that Pyongyang was following a path of aggression that will only lead to isolation and said, “Today, we say Pyongyang has the courage to pursue peace and give a better life to the people of North Korea,” earning loud applause from the students.

Obama said regarding Korean reunification, “Koreans are one people. And if just given the chance and given their freedom, Koreans in the North are capable of great progress as well.”

He cited the division between East and West Germany as an example and said, “The day that all Koreans yearn for will not come easily nor without great sacrifice. But make no mistake, it will come.”

When the times comes, he said, “checkpoints will open and watchtowers will stand empty, and families long separated will be reunited. The Korean people, at long last, will be whole and free.”

The president also spoke harshly against Iran along the same vein as North Korea.

He further discussed the advantages of nuclear technology, especially its contributions to clean energy to protect the environment.

Obama ended his speech by stating “We go together” in Korean, “Gachi gapsida.”

There was no question-and-answer session for the students, but students were encouraged to post questions to the U.S. president via social networking services such as Facebook.

The president admitted the most amusing question he received from a Korean student via SNS was when he was asked if he had ever disguised his identity to post messages in support of himself on Web sites. He said he hadn’t, though one of his daughters might have.

Obama was also made an honorary alumnus of the school by HUFS President Park Chul.

The university indicates that the school was chosen out of many Korean universities eager to invite the U.S. president because of its dedication to an English-based global education since its founding in 1954, demonstrated in part by the nation’s oldest Model United Nations (MUN) program, founded in 1995.

Furthermore, the campus has exits which can be secured and an auditorium platform which is relatively higher than other schools.

Security was tight around the school as guards checked students’ identification before they entered the campus, and unregistered vehicles were not allowed to pass through the school gates yesterday.

Some protesters rallied in front of the school to voice discontent with U.S. nuclear policy but were quickly dispersed.

After the speech, students had a brief opportunity to shake hands with the U.S. president and some exchanged brief words, mentioning shared interests they had with Obama, such as basketball and Model United Nations.

Kim Sung-min, a 20-year-old English major at HUFS, was one of the 700 students selected by lottery from a roster of 20,000 students of the school. “It’s such a great honor for the leader of the United States to come speak at our school. All the students who did not get selected were very jealous.”