Two years since the sinking of the Cheonan warship

Two years since the sinking of the Cheonan warship 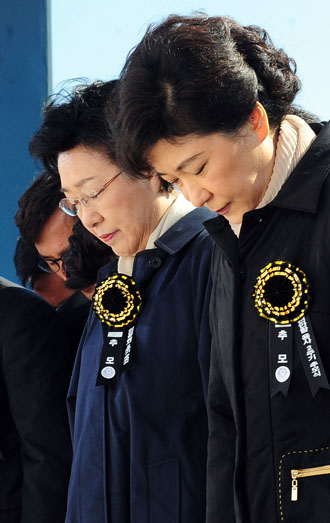 Park Geun-hye, right, interim leader of the ruling Saenuri Party, and Han Myeong-sook, left, chairwoman of the main opposition Democratic United Party, pay tribute at a memorial service held at the National Cemetery in Daejeon to mark the second anniversary of the Cheonan sinking. By Kim Seong-tae

DAEJEON - Prime Minister Kim Hwang-sik yesterday participated in the commemoration ceremony for the 46 soldiers killed on the Cheonan warship that was held in Daejeon National Cemetery.

Kim met the families of the deceased soldiers, including officer Han Ju-ho, who died at the age of 53 while trying to rescue sailors from the doomed Navy corvette, and expressed his sorrow over their tragic losses.

The prime minister stressed that the country should stop wasting time arguing over the cause of the Cheonan’s sinking and using it as a means to score ideological and political points. Rather, it should focus on establishing stronger security, he said on the second anniversary of the tragedy.

“The biggest threat to the country’s security is the internal rift,” Kim said during the ceremony.

“We can’t waste the time that we need to use for promoting a stronger security system because we have different political ideologies. We have learned from the Cheonan tragedy and Yeonpyong Island provocation that no peace or prosperity in our country will advance unless the country’s security is established. There is no doubt that the North took the South’s precious lives.”

Kim added that the Jeju naval base that is being built on Jeju Island is a very important project that can prevent any potential enemies’ armed provocations, and asked protesters to stop interfering with the project and support it.

“People who don’t believe that the Cheonan warship attack was carried out by the North should know that their children might experience a similar tragedy if they grow up and join the military,” said Lee In-ok, the father of deceased officer Lee Yong-sang. “The nation should stop bickering over the issue and get solidarity in order to prevent any more possible losses.”

During yesterday’s ceremony, politicians including Park Geun-hye, the interim head of the ruling Saenuri Party, and Han Myeong-sook, the chairwoman of the main opposition Democratic United Party, also visited the cemetery, paying their tributes by offering flowers and burning incense.

While Park visited the graveyard for the 46 sailors, a tearful Lee In-ok, father of the late Petty Officer Lee Yong-sang, said, “It’s my son. He was supposed to be discharged from the military service .?.?.” pointing to a tombstone.

Park stopped for a moment and offered words of consolation to Lee, saying that “I’m really sorry. Please, take courage.”

As Park left the graveyard, Park said, “Today, I pledged to establish a stronger force in this country every time I faced the dead soldiers’ families. I will not let our 46 soldiers’ noble sacrifices be wasted. I once again realized today that peace without a strong security system can be destroyed at any moment.”

On March 26, 2010, 46 South Korean soldiers drowned near Baekryeong Island after a torpedo attack by a North Korean military submarine.