Challenging the meaning of art, one word at a time

Challenging the meaning of art, one word at a time 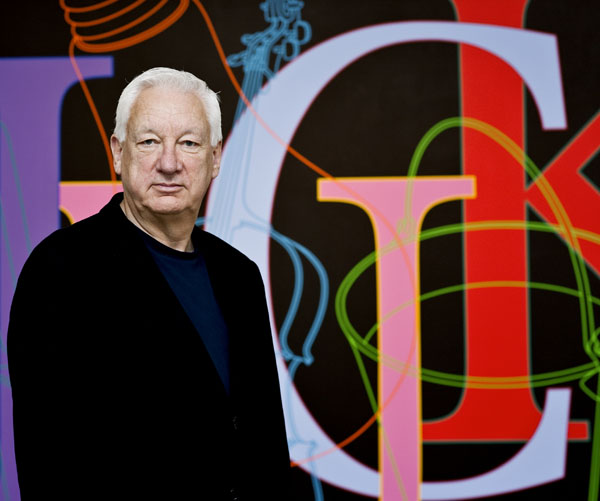 British conceptual artist Michael Craig-Martin poses in front of his 2010 painting “Untitled (LUCK)” at Gallery Hyundai in the art zone east of Gyeongbok Palace in central Seoul. Provided by the gallery


Michael Craig-Martin, 70, who is often called a pioneer in the world of conceptual art or the godfather of the YBA (Young British Artists), is holding a solo exhibition at Gallery Hyundai in the art zone east of Gyeongbok Palace in central Seoul. 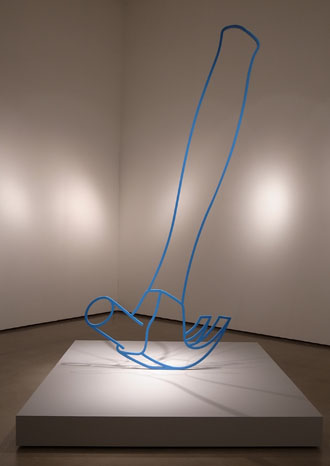 “Hammer (Blue),” a 2011 sculpture made of powder-coated steel by Michael Craig-Martin, is part of his show at Gallery Hyundai through April 29. By Moon So-young

It might be tempting to think the exhibition will consist of objects with explanations like Zen riddles, as with his famous 1974 work “An Oak Tree.” The work consists of a glass of water standing on a shelf and an accompanying sheet of questions and answers about why it is in fact an oak tree. Damien Hirst, one of the YBAs he taught and currently one of the world’s hottest artists, once called it “the greatest piece of conceptual sculpture.”

However, most of the exhibits at Gallery Hyundai are paintings of big alphabet letters and everyday objects such as a can, a lightbulb and a hanger rendered in vivid colors such as pink and yellow. The show, titled “Michael Craig-Martin: Word.Image.Desire,” features 19 of his latest paintings and one sculpture - a 3-meter-high (10-feet-high) blue hammer of steel.

Still, these works are all related to “An Oak Tree,” as they all pose the question: “What is art?”

The painting “Untitled (ART),” for example, is dominated by the word “art” and has drawings that look like stencils of objects usually associated with art such as paintbrushes and a canvas. But the painting also contains a drawing of a urinal, which is a nod to the work “Fountain” by French artist Marcel Duchamp (1887-1968). The urinal became art after Duchamp found it, signed it and brought it to an exhibition in 1917, declaring it was art. Through his actions, Duchamp overturned conventional ideas about what could or could not be considered art. Craig-Martin’s works stand as a continuation of modern and post-modern artists’ exploration of art’s limits.

“This question of ‘what is art’ was common for my generation,” he said at a press event earlier this month. “The younger generation doesn’t need to ask the question now that the horizon of art has been extended. They are benefiting from their predecessors.”

He is currently making paintings by arranging around 200 computer-generated images of objects and filling them with colors selected from about 20 of his favorite colors.

Asked why he is working with a limited number of words, colors and images, he said, “We use only a few words among many. Still, we can make subtly different meanings. It rings true for my works.”

The artist is now emeritus professor of fine art at Goldsmiths, University of London. In 2001, he was made a Commander of the Order of the British Empire for his contributions to British contemporary art.