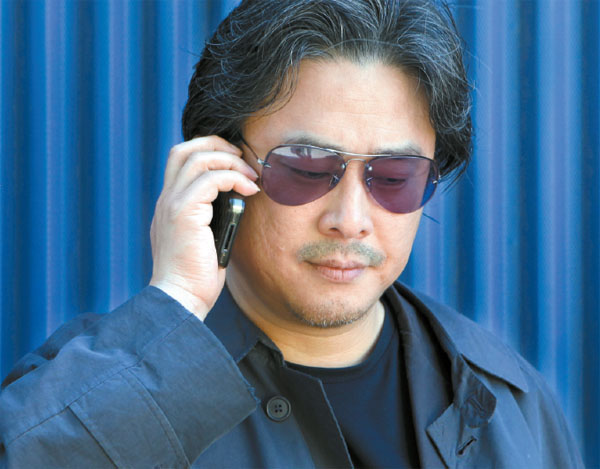 
LOS ANGELES - Acclaimed director Park Chan-wook, who is renowned for daring films such as “Oldboy” (2003), “Sympathy for Lady Vengeance” (2005) and “Thirst” (2009) recently wrapped production on his English-language film debut, a thriller called “Stoker.” 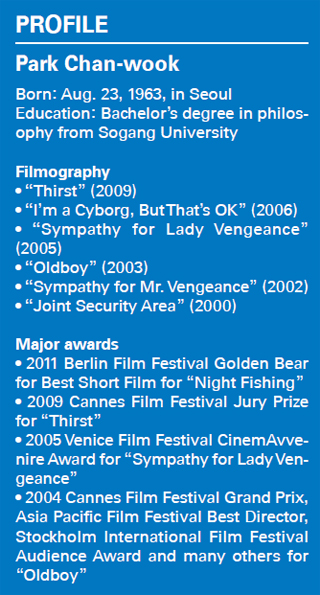 The film, which stars Nicole Kidman, Mia Wasikowska and Matthew Goode, is slated for release later this year and there is already talk of a possible Cannes premiere.

The JoongAng Ilbo met with Park in Los Angeles, where he was in the middle of post-production for the film. This is the first time he has discussed the film with the Korean media.


A. The story revolves around a father, mother and adolescent daughter who live in an isolated house in a suburb. But all is not well in the family and there is friction between the mother and daughter. One day, the father dies suddenly in a car accident, and the story starts when an estranged uncle shows up at the father’s funeral. While staying with the family, the uncle becomes involved in a love triangle with both the mother and daughter.


The screenplay for “Stoker” was on the 2010 Black List Top Ten, which lists the best unproduced screenplays in Hollywood. Why did you choose it over other screenplays?

I’d reviewed a lot of screenplays, especially a lot of the revenge films. But I limited my selections to Westerns, sci-fi films, psychological thrillers and spy movies. “Stoker” attracted my attention because it only has three main characters and the whole story unfolds in a house, which is a very confined space. I like telling big stories through small, artificially created worlds. Also, there was less pressure on me because the scale of the film isn’t that big. Besides, I thought it wouldn’t be bad to make my English-language debut with a scenario influenced by Alfred Hitchcock, because it was Hitchcock’s film “Vertigo” [1958] that made me decide to become a director.

Matthew Goode said in an interview that you speak English well but always spoke through an interpreter on set. Why didn’t you speak to everyone directly?

I was fortunate enough to meet an interpreter who was able to perfectly transmit ideas between myself and the cast and crew. Even the actors in the film have mentioned the interpreter, Jung Won-jo, by name in interviews.

Which actors or actresses would you like to work with in the future?

I’m really interested in working with Gary Oldman, who is in “Tinker, Tailor, Soldier, Spy.” Also, the Iranian actors and actresses in the film “A Separation” drew my attention because of their perfect acting.

You’d considered doing a remake of “Tinker, Tailor, Soldier, Spy.” Why didn’t you?

I really loved the film and saw it twice in the theater. But it’s because I loved it so much that I decided not to do it. I wasn’t confident about my ability to adapt it without damaging the original and was concerned about how to satisfy both people who watched the original and those who didn’t. 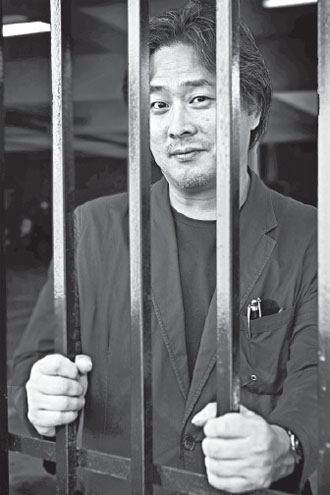 The JoongAng Ilbo met Park Chan-wook in Los Angeles on March 5. When setting up the appointment, he said that he didn’t want to pose for a picture. But he changed his mind on the day of the meeting and posed for a moment. By Kim Sang-jin

Those are natural expectations for people to have, considering my previous films. I think that revenge, which is usually an element in my films, is essential for various kinds of films, whether they be thrillers, mysteries or films with violence. But I’m not a violent or angry person like the people in my films are and those are emotions I’m actually afraid to express. Maybe that’s why I often deal with those subjects in my films.

Regarding the second point, I used to be Catholic, but now I’m not. I don’t have a particular religion, but I don’t have any hostility toward any religion and I actually respect religious people such as Johann Sebastian Bach, the famous German composer who was also a devout Christian.

What is the difference between working in Korea and working in Hollywood?

The production process in Hollywood is much faster, but I think there are both pros and cons to it.

Actors here don’t check the monitor unless told to do so by the director, unlike Korean actors, who are sensitive about how they look on screen. Even after the director says “cut,” they stay in character and wait for the next take.

Also, there was no editing in the field, compared to what happens in Korea, where there are many discussions in the field with repeated viewings of what was just filmed. I actually prefer having those discussions, but there is nothing like that here.

But there are good things about working in Hollywood - the process is effective and the director’s opinion is easily accepted.

What made the biggest impression on you while you were working here in Hollywood and what did you learn?

I was impressed that there are so many good stories and screenplays here. It also seems like many kinds of movies could be shot here, such as films dealing with race, which is hard to imagine doing in Korea.

What I learned here is that I need to speed up the production process. In fact, I often worried that filming was taking too long. I finished shooting “Stoker” in only 480 hours, compared with the more than 90 days it took to shoot my last film, “Thirst.” But, of course, the scale of “Thirst” was much larger than “Stoker.”

What are some of the good things about the Korean production system?

The assistant director here once scared me a bit when he told me I’d have to give up some scenes if I didn’t finish a shot in 15 minutes.

Cinematographer Chung Chung-hoon must have been a great help to you.

He was. I appreciated his presence on the several trips I made here with him. He was great at overseeing several departments, such as lighting and set decoration, even though it was his first time working in Hollywood and he doesn’t speak much English. I was surprised at his ability to solve almost any problem with just 10 words. He was also popular on set and even got shoulder rubs from Nicole Kidman.

While you were working on this film, did your opinion about the status of Korean film change - and if so, how? And how does it compare with other cultural exports such as K-pop or dramas?

Actually, most of the American public dislikes reading subtitles, except for movie buffs. But people in the industry in Hollywood are familiar with Korean film and they know all the names of the famous Korean directors and the titles of their works. In the global film industry, Korean film is certainly a rising power. I’m not certain about dramas and music, but film has continued to attract attention.

From where do you think Korean film gets its power?

I think it comes from the fact that Korean films aren’t telling the same old stories. Also, the characters are written very well, to show emotions that are appropriate to their circumstances and how those emotions change in extreme situations. In addition, Korean films keep audiences from dozing off because they are true to the characteristics of each genre.

How do you maintain a balance between cinematic quality and the impulse to create a box office hit?

When I’m writing a screenplay, I only think about quality. If investors decide to support the film, then it’s probably going to achieve some degree of recognition. But if the screenplay is rejected by investors, I just start another work.

It’s more important to me to do something unusual than to do something new. I don’t approach anything with the idea of making it new or unique, but I try not to follow what others are doing. When I’m shooting a very normal scene, I don’t try to invent a creative angle or camera movement, but I try to avoid falling into the same old patterns. That’s the most important thing for my individuality.

What things have you read that have helped you create your films?

I’ve been affected by all kinds of novels - mostly Eastern and Western detective stories including pure mysteries, sci-fi and hard-boiled detective fiction. I’ve also been influenced by other types of fiction and plays.

What’s next for you? Will you continue to work in Hollywood?

I was planning to make another film, “The Axe,” before I started shooting “Stoker.” But while I was still seeking investors for that film, I received the screenplay for “Stoker.” So “The Axe” will be my next work, though I need to do some more work on the casting and attracting investors. I’m also thinking about making a historical film, but I’m not sure when I’ll be able to do that.

Regarding your other question, I’d like to continue working in both Hollywood and Korea. Actually, it doesn’t matter to me where a film is made. If the story is good, I’ll follow it.

What’s most important to you in life?

My film “I’m a Cyborg, But That’s OK,” is very special to me because it shows what I’ve learned in my life. The main character, Park Il-soon [Jung Ji-hoon], puts it best in one scene when he says: “Give up hope and cheer up!” Through him, I was trying to say that we should think realistically without delusions that are based on the lies other people tell us. But it never says that we should be depressed or suicidal. The important thing is to cheer up.

The most important message in the movie is that at least we have to eat. My answer to your question is also the same - don’t forget to eat.