Lee Dong-gun discharged from the Army, greeted by Japanese fans

Lee Dong-gun discharged from the Army, greeted by Japanese fans 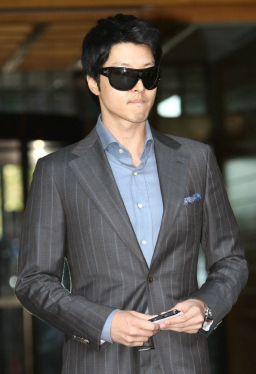 Actor Lee Dong-gun was discharged from the Army yesterday morning. The Hallyu star spent 21 months serving in the publicity support department of the Ministry of National Defense in Yongsan District, central Seoul, before being released.

Fans had camped outside the military base to catch a glimpse of the entertainer. The majority of the fans on-site were middle-aged Japanese women who had flown over for the special occasion.

Some brought flowers, some brought fans imprinted with Lee’s face and others simply held signs with welcoming remarks.

When Lee’s parents emerged on the scene, the Japanese fans recognized the pair at once and began taking photos of their favorite actor’s family members.

“Of course, military service is undertaken by all Korean males, but still I feel like today is special,” Lee’s father said.

“I feel proud of my son and hope that we will have learned something from his time away.”