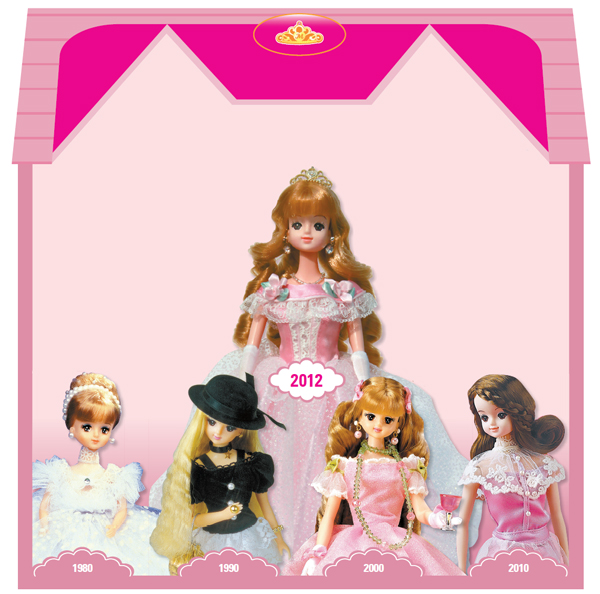 
If Barbie is a mature modern woman whose curvy figure and fashionable wardrobe have changed with the times, Mimi, Korea’s answer to the U.S. doll, is more like a little girl who still lives in a fantasy world of her own, clad in a decades-old bridal gown adorned with busy lace, beads and ribbons.

When the doe-eyed doll was introduced here three decades ago, nobody expected it would ever rival Barbie, now 53 years young and still the world’s most famous plastic doll. Even as you read this article, an average of three Barbies are sold every second. 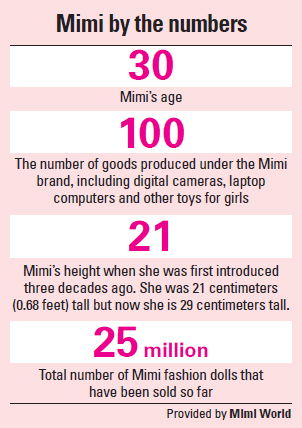 Yet Mimi, once considered a Barbie copycat, has surpassed her iconic counterpart in Korea and forged her own identity. She celebrates her 30th anniversary this year.

Over the years, Mimi has not undergone major changes to her appearance - surprising in a country where plastic surgery is in demand.

According to Lee Jong-yeul, the CEO of Mimi World, the company that makes the doll, the only major change Mimi has undergone is to her height. Over the past 30 years, Mimi has gone from 21 centimeters (0.68 feet) tall to 29.

“We’ve made a couple of adjustments to Mimi’s physique but we tried to keep the changes to her face to a minimum so that she’d look the same as 30 years ago,” Lee said.

It may seem unlikely for a doll that has undergone so few changes to be as popular with the girls of the 80s, who had little to play with other than the fashion doll, as she is with the girls of today, who have a mountain of toys from which to choose.

“If you asked me what gives Mimi her lasting appeal, I would say that it’s because we’ve always promoted her as a princess, which is a fantasy for every female, whether she’s a five-year-old girl or a woman in her 20s or 30s,” said Yun Kyung-ran, a marketing team manager at Mimi World.

“In celebrating Mimi’s 30th year, we are once again celebrating her image as a princess and are inviting everyone to do the same. I think this timeless image has helped Mimi prevail [in Korea], even though Barbie is the best-selling doll outside the country.”

Face expert Cho Yong-jin said the dolls’ fame in their respective lands is related to the differences in their physical features.

“Notions of beauty differ depending on cultural conceptions. Asians and Westerners look physically different, and the face and body of Barbie is more accepted in Western countries,” said Cho. He used to serve as a professor of fine art at Seoul National University of Education but now runs an institute that analyzes people’s characteristics based on their physical traits.

“Barbie is somewhat strange to Asians,” Cho said. “She looks like a mature woman with a fine physique, but Mimi is more accepted in Korea with her baby face and small frame.”

Mimi collector Jomiryo, a woman in her 20s who asked to go by her Internet nickname, agrees with Cho.

“Although many Koreans collect Barbies, I find her somewhat foreign. That’s why I prefer Mimi, because the way she looks is more familiar to me,” she said. She collects vintage Mimi dolls from the 80s and 90s and shares photos of the dolls on her blog (http://blog.naver.com/angelitem).

Sales figures for the Mimi doll confirm her popularity over Barbie in the local market.

According to Homeplus, the Korean unit of British retail giant Tesco, Mimi dolls and related products, such as furniture, accessories and electronic devices manufactured under the Mimi name, topped the sales charts for girls during last year’s Christmas shopping season between Dec. 8 and Dec. 25.

Mimi has become the generic trademark for fashion dolls in Korea, yet little is known about the home-grown doll and its family-run manufacturer Mimi World, which is the oldest toy manufacturer in the nation.

Mimi CEO Lee Jong-yeul recalls he was a happy child who had heaps of toys because his parents ran a small but successful stationery store in Banpo, southern Seoul.

“I was always surrounded by all types of toys,” said Lee, who took office as the CEO of Mimi World earlier this year, replacing his father Lee In-kyu.

Lee’s mother Kim Young-hee opened the store in 1973 to earn extra money while the senior Lee was teaching high school by day and attending graduate school at night. The couple had no idea that it would become their life’s work and both are still involved in the company.

As business thrived at the store, which was about 2 pyeong (6.6 square meters), the couple decided to try their hand at producing toys for children.

At the time, Barbie dolls were only available on the black market and it would be some time before Mimi emerged.

“The first thing my parents made was a plastic ball for babies,” the junior Lee recalled. His parents also produced a collection of miniature furniture for a fashion doll named Maron that they were selling at the store.

“Maron was made by a Korean-Japanese company based in Korea that produced dolls for the Japanese and Korean markets and my parents sold them,” Lee said. “They thought it would be great if they could sell furniture for the dolls, so they started making it themselves.”

But the company went bankrupt following massive demonstrations at its Korea branch.

“After that, my parents needed a doll that they could sell with the doll furniture they’d made, so they made up their minds to start producing their own fashion dolls,” he said. “That’s how Mimi was born.”

Mimi was introduced in April 1981 under the name of Lara, who had a couple of friends of her own, one of whom was Mimi.

A year later, Lara’s name was changed to Mimi because the name was already a registered trademark.

Mimi was priced at 4,000 won, which was very expensive given that a bowl of jjajangmyeon, or black bean paste noodles, cost 500 won at that time. But the doll sold well.

“As far as I know, Mimi was the first fashion doll in Korea with her own name,” said Yun, the marketing team manager at Mimi World. “Before Mimi, most dolls were just called ‘15-centimeter doll’ and ‘20-centimeter doll,’” Yun said. “In addition to that, Mimi had her own story. She loved literature but hated math, which appealed to young girls back then.”

Mimi World estimates that about 25 million Mimi dolls have been sold since their release.

To keep Mimi current, the company has had to adjust its marketing strategies for successive generations.

“In the 80s, many children believed that Mimi was real and they’d call us and ask to talk to her,” Lee said. “In the beginning, my mother pretended that she was Mimi by imitating the voice of a young girl but some of the girls would say, ‘You don’t sound like a young girl. What’s wrong with your voice?’” Lee said with a grin on his face.

Later, the company set up a Mimi hotline with professional voice actresses who took calls three or four hours a day.

“We haven’t received a single call for some time now,” Lee said. “I guess no one believes Mimi is real anymore.”

These days, the company is focused on supporting a child’s creativity.

“All our products are developed by adults but we try to think like children,” said Yun. “We often get together to talk about what we did and what we wanted to be.”

The company develops around 100 products a year for children of all ages. One of its most popular items for young children is the Mimi Sketchbook.

“Every little girl wants to draw a beautiful princess,” Yun said. “This product is designed to help children do that.”

The Mimi Sketchbook works like an overhead projector. The pink toy is an A4-sized box that comes with transparent sheets printed with sketches of Mimi. When turned on, the box lights up and the user covers one of the transparent sheets with a sheet of real paper, allowing the user to trace the image.

When the product was introduced last October, it sold out almost immediately.

Looking to the future, the country’s declining birth rate would seem to predict a negative outlook for a children’s toy company. But Yun sees things differently.

“The market for toys should be on the decline, but it’s actually growing because more people are spending money on their little ones,” said Yun. “On special occasions, grandparents, aunts, uncles, mothers and fathers all buy different items for the same child, which is quite promising for us.”

In the future, CEO Lee hopes to send Mimi overseas.

“As a second-generation CEO, I hope to contribute to Mimi’s globalization, especially in huge markets like China and the United States.

“It won’t be easy because Barbie is already out there, but that’s certainly a next step for us.”