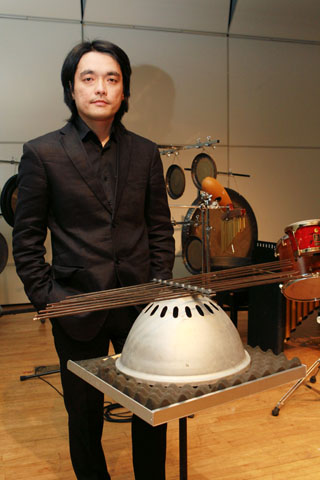 Uzbek conductor Artyom Kim said he had never seen so many people who looked similar to him as he did when he visited Tongyeong, South Gyeongsang, for the Tongyeong International Music Festival (TIMF).

“It is my first time visiting Korea,” Kim told the JoongAng Ilbo in an interview during the seven-day music festival that ended Thursday. “Wherever I go in Tongyeong, there are people who look just like me here, and it makes me feel connected.”

In order to spread Central Asian music throughout the world, Kim decided to establish his own ensemble. The Ensemble Omnibus - comprised of 12 musicians - was formed in 2004, and the name, Omnibus, has a special meaning:

“Omnibus in Latin means it can move in diverse ways,” Kim said. “In accordance with the name, the ensemble consistently travels Asia and Europe to spread the beauty of Central Asian music.”

The Ensemble Omnibus visited Korea for the first time during the TIMF to introduce its unique musical approach to the Korean Peninsula.

Kim said that in the big picture, he would categorize his music as Central Asian, but the true inspiration of his work comes from Uzbekistan in particular.

“Uzbek music is passionate, which is similar to Arabian, Iranian and Indian music,” Kim said. “But it is significantly different from Russian music, such as Tchaikovsky’s.”

Although many Russian composers - who were forced to migrate to the Uzbek Republic during Stalin’s coercive policies from 1937 to 1940 - played major roles in establishing Central Asian music, Uzbekistan has managed to develop its own unique style over the years, according to Kim.

He added that he hopes Uzbek music will continue to evolve and that he plays a role in that process. Kim is currently studying traditional sounds of Uzbekistan as well as other parts of Central Asia, in addition to developing musical instruments that can better express the Uzbek traditions.

“A slightly different sound is found in every object,” Kim said as he introduced a percussion instrument made of metal poles he made and named “Resonant.”