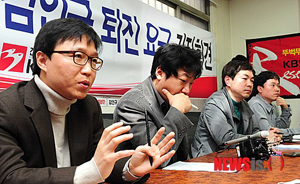 Eyes are on the KBS labor union that launched the shocking accusation about the government’s alleged illegal investigation of critics through their online news program “Reset KBS News.”

In 2009, the official labor union of the state-run broadcasting company dismissed the request to evict KBS President Kim In-kyu through a vote, but 1,100 reporters, producers and other staff based in Seoul formed their own labor union, dubbed the second union.

The second KBS labor union members have been on strike for 26 days protesting the current government’s alleged interference in their reporting, demanding the resignation of Kim. They were officially approved as a local KBS labor union by the National Union of Media Workers in January 2010. The official labor union, dubbed the first union, still has 3,000 members.

After uploading the third episode of a special report on illegal surveillance by the Prime Minister’s Office, at around 3 a.m. yesterday, they convened a press meeting and stated that the Lee Myung-bak administration did illegal spying on broadcasting companies to control the media.

A high-ranking official of the KBS headquarters told the JoongAng Ilbo that “the number of the second union members is just 9 percent of the entire workers of KBS. It’s not appropriate to reveal documents that haven’t been officially confirmed and verified through a private channel. We think it’s a political move ahead of the April election.”