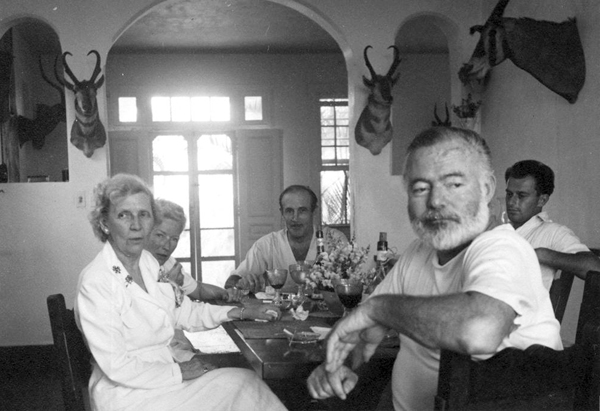 This photo from the mid-1900s shows Ernest Hemingway, second from the right, dining at his Cuban villa Finca Vigia.


Ernest Hemingway shows a tenderness that wasn’t part of his usual macho persona in a dozen unpublished letters that became publicly available Wednesday in a collection of the author’s papers at the John F. Kennedy Presidential Library and Museum.

In a letter to his friend Gianfranco Ivancich written in Cuba and dated February 1953, Hemingway wrote of euthanizing his cat “Uncle Willie’’ after it was hit by a car.

“Certainly missed you. Miss Uncle Willie. Have had to shoot people but never anyone I knew and loved for eleven years,’’ the author wrote. “Nor anyone that purred with two broken legs.’’

The letters span from 1953 to 1960, a year before the prize-winning writer’s suicide. Whether typed or written in his curly script, some of the dispatches arrived on personalized, onionskin stationery from his Cuban villa Finca Vigia. 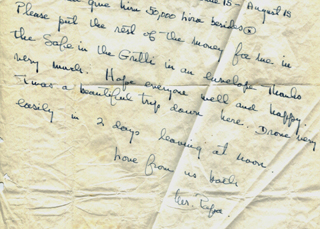 Pictured is a portion of an Aug. 6, 1953, letter handwritten by Ernest Hemingway to his Italian friend Gianfranco Ivancich. He signed it, “Love from us both, Mr. Papa.” [AP]

The author also wrote from Europe, while on safari in Africa and from his home in Idaho.

The two men met in a Venice hotel bar in 1949, bonding despite a two-decade age difference because they’d both suffered leg wounds in war.

“I wish I could write you good letters the way you do,’’ Hemingway wrote in a January 1958 letter from Cuba. “Maybe it is because I write myself out in the other writing.’’

Experts say the letters demonstrate a side to Hemingway that wasn’t part of his persona as an author whose subjects included war, bullfighting, fishing and hunting.

The Kennedy Library Foundation bought the letters from Ivancich in November, and Hemingway Collection curator Susan Wrynn met the now-elderly gentleman in Italy.

“He still writes every morning,’’ she said Wednesday. “Hemingway encouraged him to.’’

The letters, as a whole, show the author had a gentle side, and was someone who made time to be fatherly and nurturing to a younger friend, said Susan Beegel, editor of scholarly journal The Hemingway Review.

Hemingway’s letter about his cat’s death also showed the author’s struggle to separate his private and public lives. Hemingway told how a group of tourists arrived at his villa that day.

“I still had the rifle and I explained to them they had come at a bad time and to please understand and go away,’’ he wrote.

But one wasn’t deterred, according to the letter, saying, “We have come at a most interesting time. Just in time to see the great Hemingway cry because he has to kill a cat.’’

The young Italian socialite became a muse for the writer after they met at a duck-shooting outing in Italy. The woman was the model for the female lead in Hemingway’s novel “Across the River and into the Trees,’’ Beegel said.

Experts say Hemingway credited her visit to Cuba in 1950 with inspiring him as he crafted the Pulitzer Prize-winning “The Old Man and the Sea.’’