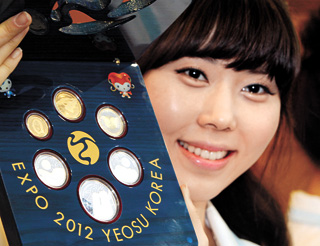 A set of commemorative coins from the Yeosu Expo organizing committee. By Ahn Seong-sik

People from China have purchased more than three out of four Yeosu Expo tickets sold overseas so far, according to the organizers, a clear reminder of where Korea should turn to in order to increase foreign presence at the event.

Around 45,000 tickets have been sold overseas so far since sales kicked off on March 7, and Chinese people have bought 35,000 tickets, or 78 percent, the organizers said on Sunday.

“Chinese people’s high expectation is serving as a catalyst for the interests in the expo,” said Na Hong-chae, a director of the Organizing Committee for Expo 2012 Yeosu Korea.

The expo, to be held in the southern port city of Yeosu for three months beginning May 12, is the second expo Korea will host after the Daejeon Expo in 1993. Before the tickets went on sale, organizers estimated around 250,000 Chinese will visit the latest expo, nearly half of the 550,000 foreign visitors it predicted will come to the event.

China is also displaying its purchasing power via souvenir coins issued by the Yeosu Expo organizers. Since the beginning of the sales of the coins on March 12, Chinese have purchased 610 million won ($541,020) worth of souvenir coins, the organizing committee said.

“The Chinese are curious about the ocean, so they have high expectations for the Yeosu Expo, which has an ocean life theme,” said Jang Byeong-gweon, a hotel tourism professor at Howon University in Gunsan, North Jeolla. “If the transportation and lodging services are well prepared, I think this expo could be a stepping stone for Korea to open an era of three million Chinese tourists.”

The Yeosu organizing committee has also focused its overseas marketing on China. Kang Dong-suk, its chairman, along with its Secretary General Kim Keun-soo, visited China 13 times last year to pitch the Korean event.

Meanwhile, the overall sales of the tickets to the Yeosu Expo surpassed 400,000 last week, including 370,000 tickets purchased by Koreans. Around 7,000 tickets were sold in Japan.