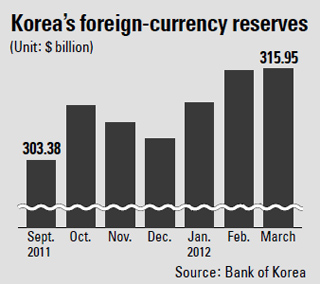 The reserves climbed to $315.95 billion, up $150 million from February when the previous record high was set, according to the Bank of Korea.

“Although the equivalent dollar value of euro- and yen-denominated assets declined as the respective currencies weakened [against the dollar], the reserves rose due to the yields from the central bank’s bond holdings and profits from securities transactions,” said Lee Soon-ho of the BOK.

The total value of the central bank’s gold bullion holdings was unchanged from the end of February at $2.17 billion. At that time, Korea ranked as the world’s seventh-largest holder of foreign exchange reserves.

Such reserves help shore up the value of the won against volatile exchange rates and serve as local banks’ last resort when seeking lines of credit.

Asia’s fourth-largest economy saw its foreign reserves surpass the $300 billion mark for the first time in April 2011 amid sustained inflows of foreign capital and robust exports.

Since then, the wealth of the nation’s foreign currency reserves has drawn mixed reviews. Some claim they are excessively large; others say they should be further expanded to serve as a buffer against sudden capital outflows.

However, experts - including international ratings agencies - have seen the gradual reserve increase as a positive development.

“In contrast to the experience during the global financial crisis in 2008, Korea’s external payments position has withstood the pressures from the euro area and market risk aversion,” Moody’s Investor Service said as it raised its outlook on Korea from “stable” to “positive” on Monday.

It noted that Korea’s foreign exchange reserves have increased in the last year, unlike during the global financial crisis when they plummeted to $201 billion.