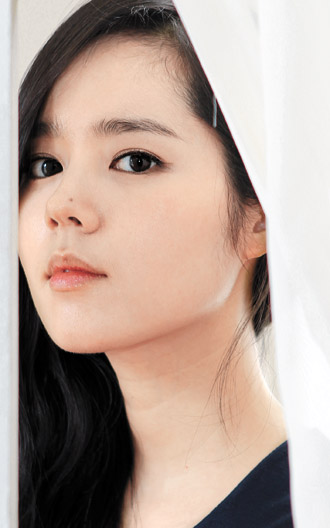 After her recent hit drama series “The Moon Embracing the Sun,” actress Han Ga-in is back on the big screen with her new film “Architecture 101.” [JoongAng Ilbo]

Han Ga-in rose to fame the moment she appeared in an Asiana Airlines commercial back in 2002. Her stunning beauty led her straight from advertisements to a spot on the KBS2 drama “Sunshine Hunting.”

When she was named best new actress at the 2003 KBS Drama Awards, it was clear the doe-eyed actress with long black hair and an oval face had cast a spell on television audiences.

But despite her early success, Han has struggled to overcome her image as strictly a pretty face rather than a serious actress. Over the past decade of drama appearances, the popular actress has repeatedly played familiar characters.

At age 30, however, Han seems to have reinvented herself. Period drama series “The Moon Embracing the Sun,” in which she played the role of Yeon-wu, the first and last love of King Lee Hwon, ended with a whopping audience share of 40 percent when the final episode aired last month.

Most recently, her film “Architecture 101” is getting rave reviews and remains a box-office hit after its release on March 22. Han plays Seo-yeon, once again the darling first love of the male lead.

The JoongAng Ilbo caught up with Han and asked her about her second heyday and her current family plans. The following are excerpts from the interview.

Q. How do you feel about your second film in eight years?

A. I had mixed feelings about the film when I first read the script. It was like running into an old friend on the street after 10 or 20 years. I had a hunch that it would turn out to be a great romance film. I could relate to the film in many ways. I personally liked the song “Remembering the Study,” [which is used in the film], and I was a college freshman back in late ’90s when I fell in love for the first time - just like my character Seo-yeon.

After the film was released, scenes in which you swear became the talk of the town. Before this film, you had a pure and innocent public image, but this film seems to change the way people think of you.

Shooting the scenes in which I swear out of anger was almost a hard task for me. We shot the scenes in many different ways. I didn’t expect those scenes to be well liked. I think people liked them maybe because I did them.

Out of the many characters I’ve played, Seo-yeon is the closest character to myself. Yeon-wu from “The Moon Embracing the Sun” was quite hard to play because she is a surreal character who doesn’t seem to exist in the real world.


Your character Seo-yeon from “Architecture 101” pays a visit to her first love Seung-min after 15 years and asks him to build her a house. How did you relate yourself to Seo-yeon? 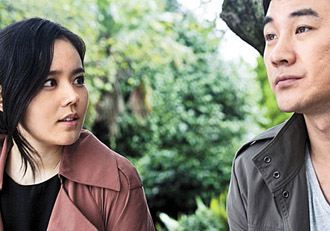 Seo-yeon (Han Ga-in), left, and Seung-min (Uhm Tae-woong) reunite 15 years after they broke up in the film “Architecture 101.” Provided by Lotte Entertainment

I think she had no option but to visit him. She got divorced from her husband and she had no one to rely on. She wanted to build a house in Jeju, where she was born, but she didn’t know who to contact. And Seung-min comes to her mind. She probably wanted to know whether Seung-min actually worked as an architect or not. Above all, she needed someone who could comfort her.

But Seo-yeon doesn’t try to steal Seung-min away from his fiancee in the film.

“The Moon Embracing the Sun” ended with a handsome share of the audience. But you were once criticized for your acting skills. How did you cope with that?

It was hard, but I thought I had to accept some of their criticisms if they had points. I could learn how to control myself, physically and mentally, during the production thanks to the criticism.

You told the media earlier this year that you’d like to consider starting a family if your drama becomes a hit. The drama became a huge hit, and your film is also doing well. Are you ready to become a mother?

To be honest, I think I’m more passionate about my work after “The Moon Embracing the Sun.” I want to focus more on my work for now. I got married at an early age, and most of my friends are still single. I hope to consider having a baby two or three years from now.

Do you think you are an actress who conjures up an image of first love?

I don’t know. I think people see me as a pure and innocent woman. I want to challenge that with totally different roles in the future, something people would least expect from me, like a member of the mafia.