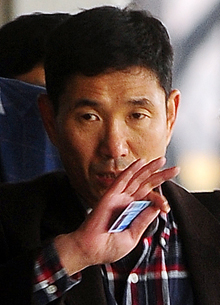 The central figure of an alleged conspiracy that key members of the Lee Myung-bak administration had orchestrated a smear campaign against the liberals on the eve of the 2007 presidential election to save Lee from a corruption scandal appeared before the prosecution yesterday.

The letter, sent to Lee’s former business partner Kim Kyung-joon by his former cellmate in the United States, Shin Kyung-hwa, claimed that the Roh Moo-hyun Blue House and then-ruling Democratic Party were behind the plot to attack Lee with a financial fraud scandal.

The alleged liberal conspiracy to corner Lee, however, saw a twist when Shin Myung, the younger brother of Shin Kyung-hwa, made a bombshell revelation last year that he was the one who wrote the letter.

He also claimed that key Lee aides were involved in the scheme. A dentist residing in the United States, Shin returned to Korea on Monday and appeared at the prosecution yesterday afternoon.

Appearing at the Seoul Central District Prosecutors’ Office yesterday, Shin said he came to answer questions. Although he told local media Monday that he would produce evidence to prove the involvement of Lee aides, Shin didn’t bring any data with him.

“I will answer faithfully and face punishment if there will be any,” Shin said. “I have no intention to get caught in the middle of a political war.”

Shin agreed to cooperate with the investigation because Kim and Hong asked the prosecution to investigate him on charges of spreading false accusations. Shin has said he created the letter with the intention to help his brother in jail and that he had no idea that the letter would be used as a political weapon during the presidential election. The probe, intended to reveal who was behind the creation of the letter, is expected to have an explosive impact on the April 11 legislative elections. If Shin’s claims were proven to be true, it will deal a fatal blow to the integrity of the Lee administration.

The complex political conspiracy involving the authenticity of the letter goes back to 2007. The so-called BBK scandal rocked Lee’s candidacy in the final months of the campaign. In August 2007, Kim made the accusation that Lee was the actual owner of the investment firm BBK, which went bankrupt and wiped out investments by 5,200 investors in 2000. Kim said Lee was the beneficiary of a massive financial fraud.

After an investigation, prosecutors cleared Lee of all charges linked to BBK on Dec. 5, 2007, and the GNP counterattacked the Roh Blue House and the DP by revealing the letter, criticizing them for having been the mastermind of the smear campaign against Lee.

“My dear comrade Kim Kyung-joon,” the letter said. “I think what we had seriously discussed was clearly wrong. No matter what promise you made with the ‘big house,’ it is just us who were being abused.”

In the final days of the presidential campaign, the GNP said the letter was evidence that the liberals had arranged Kim’s return to Korea to attack Lee, claiming that the “big house” referred to the Roh Blue House. On Dec. 19, 2007 Lee won the presidential election.