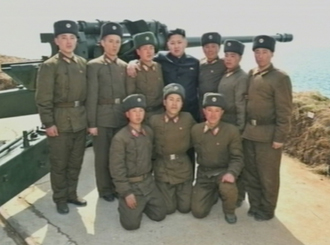 North Korea’s official heir Kim Jong-un appeared at an eastern naval post of the country, raising concerns in the South that he is preparing for a military provocation once again.

The official Korean Central News Agency yesterday reported that Kim, who is taking the role of vice-chairman of the powerful National Defense Commission, visited the joint forces team 287, a unit guarding Ryo Island in the East Sea near Wonsan, Kangwon Province in North Korea.

Looking around the unit, Kim ordered troops to “protect the island with barricades of iron and bury the enemy in the water if they invade.”

Ahead of the South’s legislative election, the young successor has appeared at military posts on so-called “field guidance trips.” On March 9, he visited the Marine Corps on Cho Island in the Yellow Sea, near Nampo City, along with a cluster of high-ranking military officials, the KCNA reported.

There, Kim stressed the strategic importance of Cho Island, saying “Cho Island is the last stronghold where you always have to keep in mind that there’s nowhere to retreat from here.”

Five days after, on March 14, Kim also watched a joint drill of the Army, Navy and Air Force, the KCNA said. Artillery corps, Navy warships and fighter jets joined the military exercise. Kim told them to boost their military power more. Concerns are rising in the neighboring South, as the young successor also made a visit to the 4th Corps of the People’s Army in the strategically important western city of Haeju shortly before he directed the shelling of the Yeonpyeong Island in November 2010. It is thought that the area Kim Jong-un visits is strategically important to where the North could potentially attack from.

A South Korean military source told local media Wednesday that three or four North Korean submarines, which are known to be shark-class, have recently disappeared from the South’s surveillance. The source said the submarines departed from two eastern posts, and the South Korean military is still looking for their whereabouts. However, experts in the South say the possibility of the North’s provocation is still low, because they are hectically preparing for the upcoming national events on the centennial of founder Kim Il Sung’s birth.

“Ahead of opening a new era of his ruling, he seems to be trying to obtain loyalty from the military through the visits,” Yang Moo-jin, a professor at the University of North Korean Studies, told the Korea JoongAng Daily.

Cheong Seong-chang, a senior fellow at the Sejong Institute, also said, “Even if the North attempts a military provocation, it would be coming after the founder’s birthday, or after a satellite launch that would bring sanctions from the international community.”