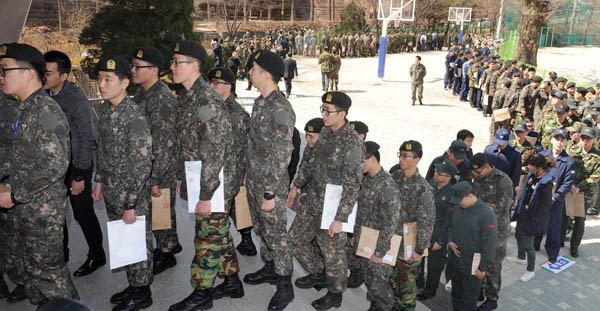 Soldiers stand in lines yesterday in front of a gymnasium at Sunrin Internet High School in Yongsan District, central Seoul, to cast their absentee votes for the April 11 general election. By Choi Seung-shik


With less than a week before next week’s general election, a series of battles royal await the ruling and opposition parties in key constituencies around the nation, particularly in the capital region, and the latest poll shows neck-and-neck races between high-profile candidates.

Under the election law, media were prohibited from releasing poll results starting yesterday, while surveys conducted by Wednesday are still allowed to be reported.

The final poll conducted jointly by Gallup Korea, Hankook Research and Embrain on Wednesday indicated hard-to-predict outcomes in the most-watched races in Seoul and Busan. In 11 constituencies, 600 voters each were polled with a margin of error of plus or minus 4 percentage points.

A clash of political titans will take place in central Seoul’s Jongno District, where the Saenuri Party’s six-term lawmaker Hong Sa-duk will face off against the Democratic United Party’s former Chairman Chung Sye-kyun. In Wednesday’s poll, Hong, a key supporter of party leader Park Geun-hye, was backed by 42.2 percent, while Chung was supported by 40.6 percent.

That was a turnaround from a March 24 poll conducted by the JoongAng Ilbo, Gallup Korea and Embrain. At the time, Chung led the race with 33.2 percent and Hong trailed with 28.8 percent.

In central Seoul’s Jung District, the Saenuri Party’s Chung Jin-suk, a former senior secretary for political affairs to President Lee Myung-bak, tried to catch up with his DUP rival Jeong Ho-jun. In the March poll, Chung was supported by 28.9 percent, but in Wednesday’s poll, he was backed by 37.8 percent. Jeong was backed by 34.2 percent in the March poll and 39.6 percent in the latest survey.

Representative Lee Sung-hun of the Saenuri Party is facing Woo Sang-ho, the Democratic United Party’s public affairs chief, in Seodaemun A District, western Seoul. In Wednesday’s poll, Lee was backed by 45.4 percent and Woo followed with 40.3 percent. In March, Woo was leading 33.4 percent to Lee’s 31.7 percent.

Yeongdeungpo B District in southwestern Seoul has another tight race. Representative Kwon Young-se of the Saenuri Party was leading the poll with 35.5 percent in March, but his rating dipped to 35.2 percent on Wednesday. DUP spokesman Shin Kyung-min got the lead over Kwon after his rating went up from 32.4 percent in March to 37.3 percent on Wednesday.

In northwestern Seoul’s Eunpyeong B District, Representative Lee Jae-oh, a key Lee Myung-bak loyalist, was leading the race with 47.7 percent, while his liberal opponent, Cheon Ho-sun of the Unified Progressive Party, was backed by 36.2 percent.

The closest competition was expected in Busan’s Busanjin A District, where three candidates are running neck and neck. Saenuri Party Representative Na Seong-lin was backed by 23.4 percent in Wednesday’s poll, while the DUP’s Kim Young-choon had 23.6 percent support and independent candidate Jeong Geun came in with 23.5 percent.

In the race to become the first lawmaker to represent the mini-capital Sejong City, the competition appeared to be less fierce. Former Prime Minister Lee Hae-chan of the DUP was backed by 36.7 percent, and Sim Dae-pyung, head of the Liberty Forward Party based in the Chungcheong region, followed with 24.2 percent.

Although Wednesday’s poll showed that the number of undecided voters decreased slightly from the March survey, experts still said the races were too close to predict. “In more than half of the 112 constituencies in Seoul and its vicinity, polls showed no clear front-runners,” said Heo Jin-hae, a Gallup Korea director.

Because tight matches are expected in many constituencies, analysts said the leads can easily be reversed. Controversies over the illegal surveillance scandal and a candidate’s foul remarks in the past are still ongoing, and the turnout of voters by age groups are also seen as factors that could decide many races.