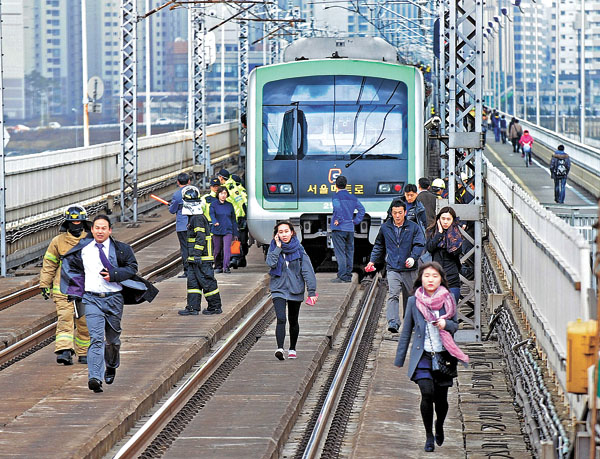 Passengers walk across the Jamsil Railroad Bridge to make transfers after the train heading from Gangbyeon Station to Jamsil Station on subway line No. 2 stopped due to a disrupted power supply. The Seoul Metro said that electric cables connected to the power system were damaged by strong winds that have caused damage all around the country. [NEWSIS]

Strong wind has caused damage all over the country in the last three days, even halting the operation of Seoul’s most crowded subway line.

Seoul Metro authorities said yesterday that 10 subway trains on line No. 2 that operated between Euljiro 3-ga Station and Sincheon Station stopped at 9:15 a.m. and were out of service for about an hour and half due to a disrupted power supply system.

The incident occurred on the middle of Jamsil Railroad Bridge, which connects Gangbyeon Station and Jamsil Station. The electric cables connected to a power supply system installed on the bridge were sagging and exposed on the track of the Jamsil bridge. The Seoul Metro said that the wires were presumed to be damaged from the strong winds that have also caused damage to public property around the country. Citizens heading to work and school had to take other transportation such as taxis and buses. Passengers stuck on the Jamsil bridge even had to walk across the bridge to find alternative transportation.

“The electric cables are connected to the roof top of each train to supply power, and there is no way to protect them from the wind,” Kim Wan-joong, an official at the Seoul Metro told the JoongAng Ilbo.

The Seoul Metro is being criticized for managing the situation poorly. The passengers who were on the subway trains said that the Seoul Metro did not mention anything about the power supply problem on the Jamsil bridge.

The announcement on the intercom repeated for the first 20 minutes that the train was delayed because they had to keep an appropriate distance between each train.

“I trusted their information and waited calmly but I’m now so late for work,” 38-year-old citizen Lee Seung-rye complained. “They always work this way. Once an accident has occurred, they never tell the truth and just try to solve the problem in secret.”

Seoul Metro then announced to passengers that they will refund the subway fare in cash. A total of 13,280 passengers received 1,150 won each for a refund.

They also failed to give explanations in English, which made international passengers uncomfortable. “I thought something like a terror attack occurred when I witnessed people getting off of the train,” 32-year-old U.S. tourist James Kendall told the JoongAng Ilbo.

“I liked Seoul’s subway because it informs each station in English, but I don’t understand why they didn’t make any announcements about this problem. I wasted my time wandering around the station instead of enjoying the city.”