This 19th-century, eight-paneled folding screen owned by the Leeum, Samsung Museum of Art, depicts study and related items such as a brush and ink stone as well as a bookshelf and bookstand. Provided by the Gyeonggi Provincial Museum


If you thought all of the important folding screens from ancient Korean palaces - which were often placed behind the king’s chair - depicted only scenes from nature such as mountains and waterfalls or animals such as phoenixes and dragons, think again.

King Jeongjo (1752-1800) of the Joseon Dynasty (1392-1910), a respected king from the dynasty, once ordered his court painters to draw the royal study, including the bookshelf and the books and stationery in it, on a screen placed behind his chair. 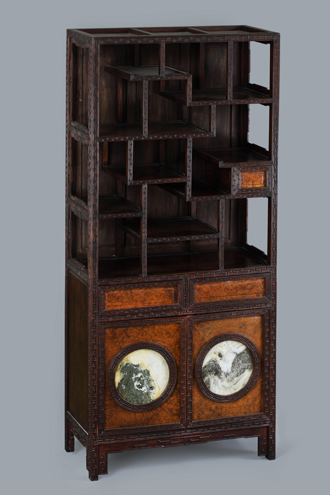 Daebogyeok, a cabinet from China’s Qing Dynasty, was also a subject in paintings, and observers say chaekgeori most likely originated with such paintings.

That was the beginning of a brand new genre of drawings in 18th century Joseon called chaekgeori. (chaek in Korean means book, and geori is roughly translated as related assortment.)

“I usually read on weekdays. But when I am overloaded with work and do not have time to read, I should use drawings to keep my mind and eyes focused on [study and reading],” the king said according to “Ildeuklok,” a book from 1814 that recorded the king’s actions and remarks.

In fact, Jeongjo’s love of chaekgeori was so strong that he even banished two court painters - Shin Han-pyeong and Lee Jong-hyeon - because they refused to draw the study, according to another ancient document called “Nagakillyeok.”

What was so special about the drawings of the king’s study?

An exhibition dedicated to drawings of the studies of ancient and modern Koreans aims to answer this question.

“Chaekgeori Screen Paintings: History of Studies from the Joseon Dynasty to Modern Times” continues through June 10 at the Gyeonggi Provincial Museum in Giheung in Yongin, Gyeonggi, about an hour and a half drive south of Seoul.

The exhibition showcases some 50 pieces from various major institutions such as the National Palace Museum of Korea, Seoul Museum of History, and Leeum, Samsung Museum of Art.

Museum officials say this is the first such exhibition in Korea.

“Chaekgeori appears to have originated in the Qing Dynasty [1644-1911], but its popularity in latter Joseon is closely related to Jeongjo,” the museum said in a press release. “The 500 years of the Joseon Dynasty revolved around Confucianism and civil administration, and the elites of the time hoped to contribute to the country’s development through books and writing. In that sense, chaekgeori best reflects the taste of the Joseon elite.”

The exhibition is organized into five themes. The first displays paintings of the Joseon people and shows their love for books; the second shows the chaekgeori at palaces; the third shows the chaekgeori used to decorate upper class homes; and the fourth highlights folk paintings that used study and books as a motif but are distinctly different from the chaekgeori enjoyed by royals and members of the upper class. The last section highlights modern art forms such as collage, photography and pop art on study and books.