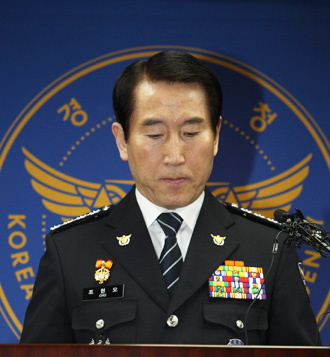 National Police Agency Commissioner Cho Hyun-oh issues an apology and resigns to take responsibility for the police’s bungling and “hushing up” of a murder case. [YONHAP]

Commissioner of the National Police Agency Cho Hyun-oh resigned to take responsibility for police’s inability to track down and save a kidnap victim who called for help before being raped, murdered and dismembered.

“I sincerely apologize to the bereaved family of the victim,” Cho said at a press conference Monday morning at the NPA office in Seodaemun District, central Seoul. “The country is still outraged over this terrible tragedy and I feel strong responsibility as the chief of the investigative agency. There is no doubt that the police have handled the case poorly and we once again apologize to the nation for our failures in saving a precious life, which is the fundamental obligation of the police.”

On April 1, the Gyeonggi Provincial Police Agency received a call from a 28-year-old woman in Suwon who said she had been kidnapped by a strange man and was about to be raped. She informed the police of her whereabouts while locked inside her attacker’s house, and desperately waited for help.

The police failed to find her for the next 13 hours despite the fact that they had specific location information from the victim as well as a GPS tracking device that could detect callers’ cell phone signals.

When the police finally stormed the house, the alleged rapist-killer was cutting the victim’s corpse into pieces to dispose of her body.

In the days that followed, a succession of police fumbles and oversights were revealed, along with false reports and coverups of what actually occurred.

The Suwon Municipal Police Agency, which is at the center of the controversy, said last week they arrested a 42-year-old ethnic Korean from China surnamed Woo at 11:50 a.m. on April 2 at his house in Ji-dong, Paldal District, in Suwon, 13 hours after they received a call for help from the victim at 10:58 p.m. April 1. Police said they tried to find the woman based on information she gave them and by tracing the signal of the phone call, but failed to find her in time because the information was inaccurate and they couldn’t search all houses in the area without warrants.

Last week, media inquiries forced the police to release a partial transcript of the phone call to the 112 emergency number, and said the woman talked for a minute and 20 seconds but stayed on the line one to two more minutes without talking.

After an investigation by an audit team assigned by the police, it turned out the phone call was seven minutes and 36 seconds. Moreover, the 20 officers at the emergency call center listened to the victim screaming for help for around six minutes.

The audit team said officers misjudged the situation as a married couple’s quarrel and didn’t report it to higher-ranking authorities until they arrested Woo 13 hours later. The transcript of the call has an officer asking the kidnapped woman, “Are you really saying that you’re being raped?”

The suspect testified during questioning on April 2 that he kidnapped the victim at 10:50 p.m. on April 1 because he was annoyed at her bumping into him at a convenience store. He said he strangled her to death at 5:00 a.m. next day, meaning that the police had about six hours to find and rescue the woman.

The victim’s sister joined the police in their hunt in the neighborhood. “When the police caught the suspect, we realized that the crime scene was only about 20 footsteps away from the vehicle where I stayed with a couple of police officers since 3 a.m.,” the sister told the JoongAng Ilbo. “The police, who were supposed to search for my little sister, were dozing off inside the car.”

When the family asked the police to trace the victim’s mobile phone signal, one Suwon officer told the sister, “If we handle the trace process, it takes a longer time to get approved than if a family member makes the request directly. I suggest you visit the local fire station and they will take care of you.”

The police also insisted they did not have enough information about the victim’s whereabouts from her description in the call to 112. The transcript shows that the victim clearly said she was inside her attacker’s house somewhere between the Motgol public playground and Jidong Elementary School.

The police said they focused their search on areas around the playground because the victim had mentioned it several times. The crime scene was later found to be closer to the school, an area the police neglected.

The police also said they had immediately dispatched 35 officers to search for the woman. The special audit team said only six patrol units were mobilized on April 1.

Cho Nam-kwon, chief investigator of the Suwon Municipal Police, who insisted he had managed the entire search from Sunday night to Monday morning, was not even at the scene. It later turned out that he joined the search at 7:00 a.m. April 2.

In his resignation yesterday, NPA Commissioner Cho said, “The police have disappointed the public with their insincere attitude toward the case and have only been busy hushing up the case. I will not hesitate to punish officers who are involved in this case.” Cho added that he will try to improve the investigation system and the police’s 112 emergency hot line until his resignation is approved by the Blue House. Followed by Cho, Seo Cheon-ho, the commissioner of the Gyeonggi Provincial Police Agency, has also resigned from his post.

As for the alleged murderer in Suwon, police said yesterday they suspect Woo planned the rape and murder, and didn’t do it on a whim. They said they have secured 13 seconds of CCTV footage from the back gate of Jidong Elementary School. In the footage, the suspect was clearly waiting for the victim crossing a street from behind a telephone pole, and he attacked from her back. The police are now considering Woo a possible suspect in unsolved serial killings.