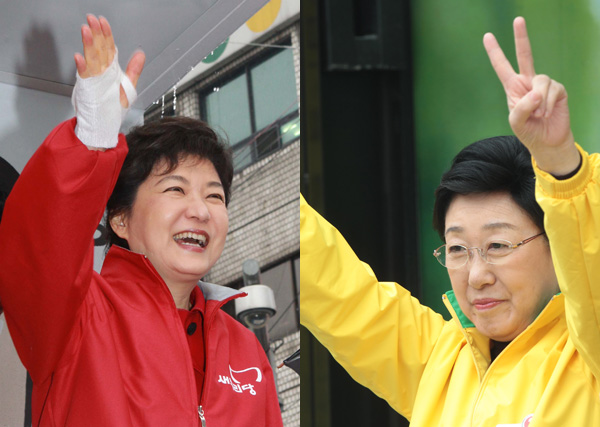 
On the eve of today’s general election, the ruling and opposition parties campaigned to the last minute, focusing on rallying support in key neck-and-neck races in Seoul and Gyeonggi.

“Help the Saenuri Party to have the power to stop the dangerous, out-of-control opposition parties,” Representative Park Geun-hye, the leader of the party, said at a press conference yesterday. “I and the Saenuri Party will devote everything for the happiness of the people and to build a proper Korea.”

After the press conference, Park toured key constituencies in northern Seoul and headed to Gyeonggi Province.

Representative Lee Hye-hoon, the chief campaign manager of the conservative ruling party, said in a radio interview yesterday afternoon that the party is facing tight races, but it managed to escape the worst. She asked voters to stop the liberal alliance of the Democratic United and Unified Progressive Parties from dominating the National Assembly.

Democratic United Party Chairwoman Han Myeong-sook also toured Seoul and urged voters to support her party and the liberal alliance. Starting with a visit to the Dongdaemun Market at midnight, she visited key constituencies around the capital and asked voters to pass a negative judgment on the Lee Myung-bak administration.

“If you vote for the Saenuri Party, the Lee administration will win,” Han said. “And they won’t feel afraid of the people. We must pass a judgment on the high-handed, arrogant government.”

Stressing that the DUP’s goal is stopping the Saenuri Party from winning an absolute majority in the 300-seat National Assembly, Representative Park Sun-sook, a chief campaigner, said turnout is the key to an opposition victory. “This time, the conservatives are united more than ever,” she said. “We can only see our chance in neck-and-neck races if the turnout is at least 60 percent.”

A higher turnout is generally believed to be beneficial to the liberals, while a lower turnout is considered to be favorable to the conservatives.

While normal campaign activities wrapped up yesterday at midnight, a drive to encourage voters to go to the polls will be allowed today under the revised election law.

It remains to be seen if social networking services will influence the turnout once again. In the June 2010 local elections, such postings were proven effective. Turnout skyrocketed in the afternoon, particularly after work hours, as office workers in their 20s, 30s and 40s often cast ballots after work. Elder voters tend to vote in the morning.

Ahn Cheol-soo, whom liberals hope will run for president in December, posted a video message on YouTube Monday evening appealing for a high turnout. He made a similar appeal during the Seoul mayoral by-election last October when visiting candidate Park Won-soon on the eve of the vote. Park won the mayoralty.

“This election is taking place at an important inflection point from the era of competition and confrontation to an era of harmony and balance,” Ahn said. “The quality of our lives will change depending on how we vote.”

Ahn also promised to wear a miniskirt and sing and dance if the turnout is higher than 70 percent, the latest in a series of lighthearted promises by public figures to encourage a big turnout.

Novelist Lee Oi-soo posted a message on Twitter in late March promising to cut his trademark long hair if the turnout is over 70 percent. Lee has 1.3 million followers on Twitter.

DUP Chairwoman Han promised her Twitter followers she would dance at Gwanghwamun Plaza if the turnout is higher than 70 percent.