Suspect in Suwon may be a drifting serial killer

Suspect in Suwon may be a drifting serial killer 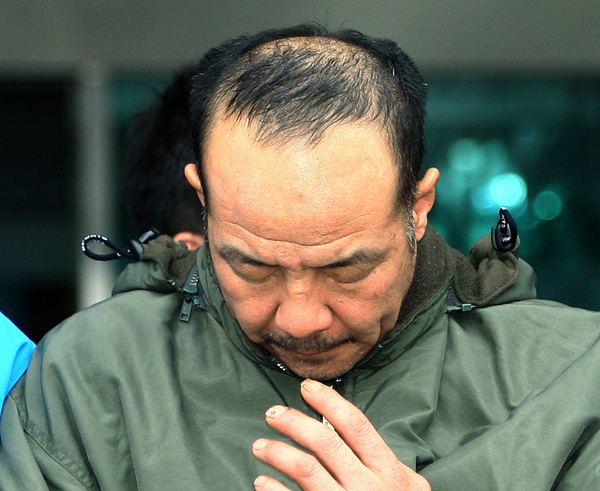 The Suwon murder suspect is escorted to the prosecutors’ office yesterday by policemen from the Nambu Police Precinct in Suwon, Gyeonggi. [NEWSIS]


The man who murdered and dismembered a 28-year old woman in Suwon - whom police failed to track down for 13 hours after she called 112 to say she was abducted - may be a serial killer, according to an audit team investigating the murder and police’s handling of the case.

The audit team, assigned by Gyeonggi Provincial Police Agency, is also uncovering more details of the police’s botching of the hunt and their attempts to conceal it from the public.

CCTV footage recovered from one of six cameras around Jidong Elementary School in Suwon, which is about 60 meters away from the crime scene, shows the suspect’s initial abduction of the victim.

At 10:32 p.m. on April 1, a CCTV camera at the back gate of the school captured the image of a man standing behind a telephone pole. The man attacks the victim from behind after she passes the pole and then drags her away. In the 13-second video, the man acts quickly and decisively.

The police said the suspect, a 42-year old Chinese of Korean descent surnamed Woo, behaved like a serial killer in the video.

The police say Woo testified that he strangled his victim around 5:00 a.m.

Police finally found Woo in his home at 11:00 a.m. on April 2 while in the act of dismembering the victim’s body for disposal. They also found five or six tools, which they are now testing for remains of any previous victims.

“It looks like the suspect has carefully planned a murder,” professor Pyo Chang-won of Korean National Police University told the JoongAng Ilbo.

Police had said earlier that Woo told them in questioning that he was drunk on the night of the abduction and kidnapped the woman on a whim because she had bumped into him without apology while he was smoking outside a convenience store.

The CCTV footage was provided by the integrated control center in Yeongtong, Suwon that manages all CCTV records of Ji-dong, Paldal District. The local police received the footage at 6:00 a.m. on April 2.

However, in the days after the murder, the Suwon police told the media that they had recovered no CCTV footage of the suspect and the victim.

But according to the audit team investigating the police, the officers on the case didn’t go through the footage that morning, and once the suspect was arrested, believed his story that he abducted and killed the woman on a whim.

“We didn’t pay attention to the CCTV footage after we arrested Woo,” Kim Chun-sik, an investigator who participated in the search told the media during a press conference held at the Gyeonggi provincial police agency Monday.

In truth, the officers involved in the search and the 112 hotline officers did review the footage on April 5, but then told the public that there was no such footage, presumably to avoid being criticized for not having watched it earlier.

The audit team said the officers were attempting to cover up the existence of the footage to protect themselves. The police said several high-ranking officers - including Cho Nam-kwon, chief investigator of the Suwon police, who didn’t enter the search for the victim until hours after her telephone call for help - watched the CCTV footage before telling the public there was none. Officer Cho was relieved of his post last week.

The police said that Woo entered Korea in September 2007 and has been moving between several cities such as Daejeon, Geoje Island, Jeju Island, and Yongin and Suwon in Gyeonggi.

The police said 135 female victims have been murdered or gone missing in these areas.