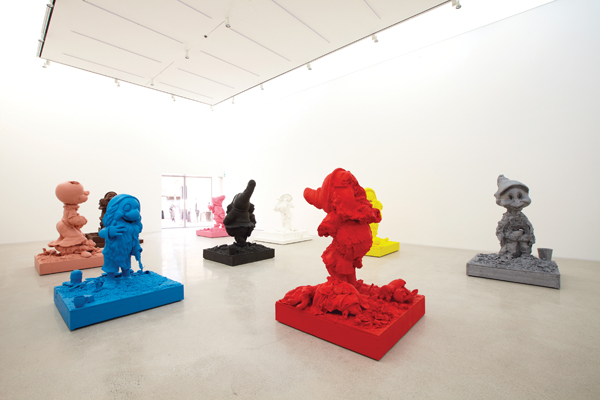 “Nine Dwarfs” by Paul McCarthy is now on display at K3, Kukje Gallery’s new building, which was recently completed in the art zone east of Gyeongbok Palace in central Seoul. The 67-year-old American artist has made a grotesque and sexual fairy tale satire with his unique twist on Walt Disney’s “Snow White.” Provided by the gallery

K3, Kukje Gallery’s new exhibition building in the art zone east of Gyeongbok Palace has turned into the land of a grotesque fairy tale.

The white cube building holds enlarged sculptures of nine dwarfs cast in silicone rubber, each of a strong, basic color such as red, yellow or blue. The pieces seem to be adapted from the cute, kid-friendly characters of Walt Disney’s animated film “Snow White and the Seven Dwarfs”(1937), but there’s something off about them.

The dwarfs’ distorted shapes, with some parts seemingly crushed or broken and scattered on their pedestals, make for a dark and ominous ambience despite their colors. The dwarfs, and especially some of their noses, appear phallic, arousing delicate unease from viewers.

Put together, the nine dwarfs are part of the “White Snow” (not Snow White) series by Paul McCarthy, 67, an artist who has a history of creating sexualized pieces for exhibition. 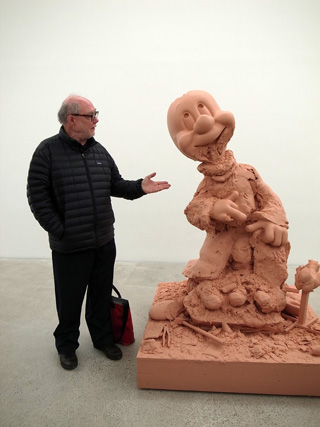 Some viewers might be shocked to see the fairy tale characters twisted in this “adult only” way. But those who are familiar with McCarthy could think that the exhibits are rather mild compared the artist’s other works, including the “Pig Island” sculpture series that depicts former U.S. President George W. Bush having sex with pigs.

Sex and politics have always fascinated the controversial artist, who is also known for the “Heidi” and “Pinocchio” series. These works grotesquely reinterpret children’s novels and are related to power, sex and violence.

“I felt interest in the family structure of ‘Heidi.’ I thought it has something to do with patriarchy,” McCarthy said during a press meeting at the gallery in central Seoul late last week. He said he has always been interested in the “patriarch as clown.”

“One of the major issues that we face is the issue of equality, the issue of who is in control,” he said. “So I’m questioning the position of the patriarchal male today and, in part of that, the phallus and phallic weapons that the male has.”

He added that as an artist, he deals with the question externally, but as a male, he cannot help but examine it personally as well. As such, his works reflect the “question of public and private” at the same time, he said.

“The sculptures show how the dwarfs gaze at the young and beautiful Snow White with their bulbous noses clearly symbolizing various iterations of the phallus,” said Zoe Chun, curator at Kukje Gallery. “They are not all adorable nor obscene, but exist in between, eliciting pathos.”

For his 40-year artistic career, McCarthy has used various media ranging from sculptures to photography, video and performance.

He is well known for “Bunker Basement,” a large-scale installation and performance filmed in the artist’s Los Angeles studio in 2003 in which the artist dressed up as former President Bush, repeatedly performing grotesque sexual behaviors with Queen Elizabeth and Osama bin Laden.

Asked why he frequently focuses on Bush, he said, “I think an artist is a clown, and there is nothing sacred to a clown.”

He also said that the Bush in his controversial works is “not the actual man but what he represents - an iconic political character,” so he will continue to feature him even though he is no longer president.

McCarthy’s controversial “Snow White” adaptation is bound to draw attention to Kukje Gallery’s new K3 building, which was designed to accommodate such large installation works and new media pieces, the gallery said in a press release. The building is 6.1 meters tall (20 feet), though it has only one story above the ground. The Brooklyn-based architectural firm SO ? IL, which designed the new building, was awarded the AIA Award from the American Institute of Architects for the building in May 2011, according to the gallery.

The showing celebrates Kukje Gallery’s 30th anniversary and the opening of its new building. In addition to the dwarfs, there is an aluminum sculpture titled “Apple Tree Boy Apple Tree Girl” placed for viewing in K3’s backyard.

The exhibition runs through May 12. Admission is free. The gallery is open Monday to Saturday from 10 a.m. to 6 p.m. and until 5 p.m on Sundays.