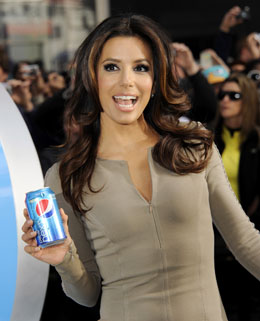 The 37-year-old actress was named a national co-chair for President Barack Obama’s re-election campaign in February, and she’s bidding farewell to her sassy, model-turned-housewife character Gabrielle Solis on the ABC drama’s May 13 finale.

But making the leap from the domestic affairs of “Housewives’’ to a national political campaign hasn’t been an easy transition.

“People go, ‘Who cares about your opinion, you’re just pretty,’?’’ Longoria said. “And it’s like, ‘Why can’t I have an intellectual argument about immigration or health care reform just because I’m pretty?’?”

The Mexican-American actress is also developing a dating reality series titled “All About Love” for NBC and is co-producing ABC’s upcoming telenovela-style TV drama “Devious Maids” about the scandalous lives of the hired help.

“With any minority community, whether you’re female, Latino or black, there are limited roles out there in Hollywood because we need more people behind the camera,” Longoria said during a recent interview for the launch of the new low-sugar drink Pepsi Next.

Longoria, who is working on her master’s degree in Mexican-American Studies at California State University, Northridge, said her biggest accomplishment will be making a difference at the voting booth in November.