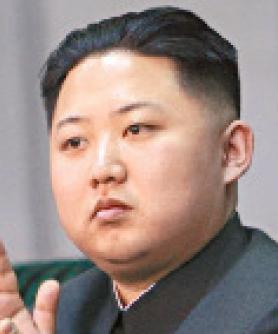 North Korea appointed heir Kim Jong-un as the “first secretary” of the ruling party, the de facto leader of the regime, ushering in a new era under his ruling.

“The fourth session of the Workers’ Party’s delegates in Pyongyang determined to highly honor the great leader and comrade Kim Jong-il as the secretary general of the party eternally,” the official Korean Central News Agency reported yesterday.

“Following the legacy of great comrade Kim Jong-il, we decided to appoint Kim Jong-un as the first secretary of the party, who is our beloved, great spiritual leader of the people and the Workers’ Party.” 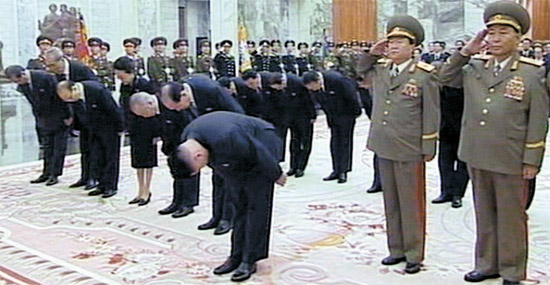 Experts in the South view the newly-created title of “first secretary” as having equal power to the late leader’s title of secretary general, with the same roles and responsibility.

“When his grandfather, Kim Il Sung, died, his son Jong-il abolished the title of Juseok [supreme leader], and praised the founder as ‘eternal Juseok,’?” Cheong Seong-chang, a senior fellow of the Sejong Institute, said. “Now, heir Kim Jong-un has also abolished the title of secretary general and determined to praise his father as ‘eternal secretary general.’

“Appointing late leader Kim Jong-il to the post of ‘eternal secretary general’ is just a formality,” Yang Moo-jin, a professor at the University of North Korean Studies, told the Korea JoongAng Daily. “We can just simply think of Jong-un as the de facto leader of the party, because the meeting of the ruling party’s representatives is meant to elect their leader.

“However, the party will have to revise its internal regulation, to pinpoint responsibility and roles of the newly created title, the first secretary,” Yang added. “But the roles and the responsibility of Jong-un would possibly be almost the same as those of the secretary general.” After the death of leader Kim Jong-il, the two highest positions - the secretary general of the party and the chairman of the powerful National Defense Commission - remained vacant.

“Now North Korea has declared the new era of rule under Kim Jong-un,” Yang said. “So far, Jong-un had been recognized only as an heir, but now he has been inaugurated into the highest political position of the regime, endorsed through the formal proceedings of the party.”

Pundits now predict that Jong-un will be named as chairman of the top-decision making body at the upcoming Supreme People’s Assembly tomorrow.

A day before the special conference of the party, a string of fresh faces had been also promoted, raising speculation that they will become new, close members of the heir’s inner circle.

One of them was Kim Jong-gak, who was promoted to the Minister of People’s Armed Forces, which is the defense ministry of the country, the KCNA reported on Tuesday.

He used to be the first deputy director of the General Political Bureau, in charge of disciplining and promoting soldiers. Other notable figures include Choe Ryong-hae and Hyon Chol-hae. The KCNA reported on Tuesday that both were honored as “vice marshals,” the No. 3 military title in the communist country.