North fuels up rocket, launch could be today

North fuels up rocket, launch could be today 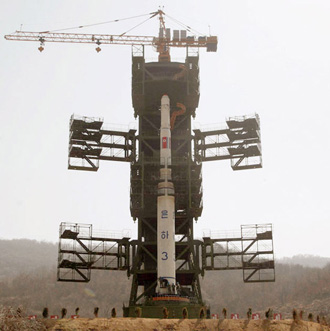 North Korea said yesterday that it was injecting fuel into a long-range rocket for a launch planned as early as today at a new launch site in the country’s northwestern region.

“I think the fuel injection will be completed at an appropriate date,” Paek Chang-ho, head of the satellite control center of the Korean Committee of Space Technology, told a group of foreign journalists invited to witness the launch at Tongchang-ri, North Pyongan.

The launch, which the North said will mark the centennial of the birth of North Korean founder Kim Il Sung this Sunday, is widely seen as a disguised test of a long-range missile. North Korea says it is to lift a satellite into space.

The North has said the launch would be made within an April 12-16 window.

“As for the exact timing of the launch, it will be decided by my superiors,” Paek told the reporters.

Japan’s Sankei Shimbun predicted yesterday that the North would choose today for the launch based on weather conditions, which it called the most decisive factor for a successful rocket launch.

“The notice by North Korea that the missile could be launched from the 12th was made on the premise that the launch was set for the 12th,” an official of Japan’s Self-Defense Forces was quoted as saying by Sankei.

Some South Korean media, quoting North Korea observers in Seoul, said the North would likely launch the rocket on Saturday to maximize its political symbolism. The North, strained to meet its self-pronounced goal of becoming a “strong and prosperous” country this year, is also planning a large-sized military parade in Pyongyang on Sunday.

U.S. Secretary of State Hillary Clinton Tuesday warned Pyongyang not to go ahead with the rocket launch and expressed concern that the communist state may also plan more “provocations.”

“This launch will give credence to the view that North Korean leaders see improved relations with the outside world as a threat to the existence of their system,” Clinton said in a speech to the U.S. Naval Academy. “And recent history strongly suggests that additional provocations may follow.”

Clinton did not elaborate, but a South Korean official earlier said that North Korea appears to be preparing for a third nuclear test after the rocket launch.

Clinton said that the United States was “working around the clock” with allies South Korea and Japan to “sharpen our deterrent.”

Clinton said that North Korea’s launch plan “raises questions about Pyongyang’s seriousness in saying that it desires to improve relations with us and its neighbors.”