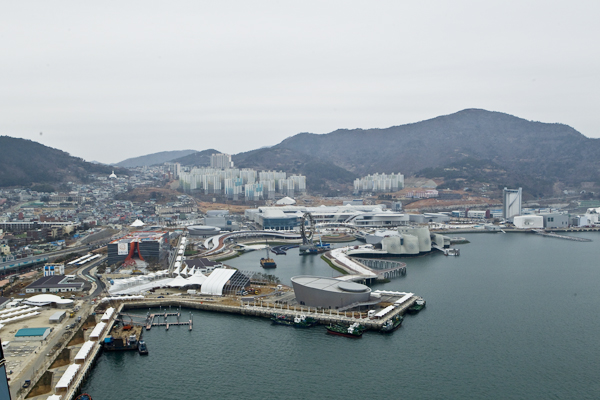 Facilities for Yeosu Expo take shape as the expo readies itself to open a month from today. Provided by Yeosu Expo organizing committee

The Yeosu Expo, or the International Exposition Yeosu Korea 2012, starts a month from today. That signals the start of a countdown to what organizers say is a shrewd preparation period so visitors can enjoy the event to the fullest.

The expo, to be held on 2.71 million square meters (670 acres) of land of the southern Korean port city, will hold approximately 400 performances more than 8,000 times during the 93-day-long expo period, meaning at least 100 performances will be featured every day on average.

Many of the 105 countries are planning events during the expo, and will display their unique cultural facets through a variety of performances.

All those events will be scattered across 23 exhibition halls, including the International Pavilion, which is three times bigger than Seoul’s COEX convention center.

The following are five must-see landmarks of the expo:

“The O” will be the first landmark you see once you pass the main gate of the expo park. The large, circle-shaped construction is 43 meters (141 feet) in diameter, looming over a 17,544 square-meter stage raised above the sea. The O is said to symbolize the ocean as well as the number zero, in reference to a ground zero for the future. Like a donut, The O is hollow inside, but it can project various images onto the empty space inside it using lasers, holograms and projectors. The media show on The O will run throughout the expo period from the opening day, May 12, but only for 30 minutes at night between 9:30 p.m. and 10 p.m.

The Big-O, which encompasses The O and surrounding facilities, will also hold fountain shows, fireworks and a water opera by French troupes. The weekend will feature performances by K-pop singers at the Big-O between 7:30 p.m. and 8:30 p.m.

The Sky Tower is the next awe-inspiring building at the Yeosu Expo. It stands 57 meters high with the two harp-shaped sides of a pipe organs embracing the main pillars of the building. The giant instrument entered the Guinness Book of Records on Oct. 21 last year as the world’s loudest pipe organ. The tower will make six live pipe organ performances a day during the expo period. It will also open and close the daily operation of the expo with the sound of foghorn.

There are fewer things that could fit better with the expo’s theme of marine life than an aquarium. Consequently, the expo organizer built the country’s largest aquarium. Almost as big as two and a half soccer fields combined, the aquarium will be able to hold 6,030 tons of water, six times the amount at 63 Sea World in Seoul. Thirty-four large and small water tanks at the Yeosu Expo will hold 34,000 marine animals of 300 different species.

A white beluga whale will be introduced to Korea for the first time through the Yeosu Expo. Three belugas will perform various acrobatic shows. The Baikal seal is another rare animal that will make an appearance. About 90 minutes will be necessary to explore every corner of the aquarium, the organizers say.

The digital gallery is another to watch. Named Expo Digital Gallery, or EDG, it is an electronic display hung on the ceiling of the International Pavilion. With a length of 218 meters and width of 30 meters, the light-emitting diode display shows images of various marine animals.

The Theme Pavilion, built to express the expo theme, “The Living Ocean and Coast,” is the first offshore pavilion in Korea. It is comprised of a main showroom and three exhibition halls.

The lobby of the Theme Pavilion has a 20-meter-high screen hung horizontally on the wall which shows various research activities conducted by Korea’s marine bases in places like Antarctica.

The main showroom will show a 20-minute, three-dimensional performance in which a dugong-shaped robot and boy play undersea explorers against a digital backdrop of the sea.

The facilities were 98.3 percent complete last Friday and will be more than ready to operate at their full potential by the time of opening, said Kim Seung-ki, an official of the organizing committee.

For those who want to take a first-hand glimpse of the expo earlier the rest, the organizers are preparing a preopening. The one-day event, to be held on May 5, a week ahead of the official opening, will give up to 110,000 people a chance to see the major exhibitions at only 3,000 won ($2.60) a ticket. Already, more than 80,000 people have applied to attend the preopening, the organizers said.

The official entrance tickets are sold at 33,000 won for adults, 25,000 for adolescents and 19,000 won for children aged 4-12 through the expo’s Web site or the Web sites of other sponsoring companies. Reservations until the end of this month provide a 5-percent discount.

The nation’s bullet-train, KTX, will whisk visitors from Seoul’s Yongsan station to Yeosu in just under three hours.