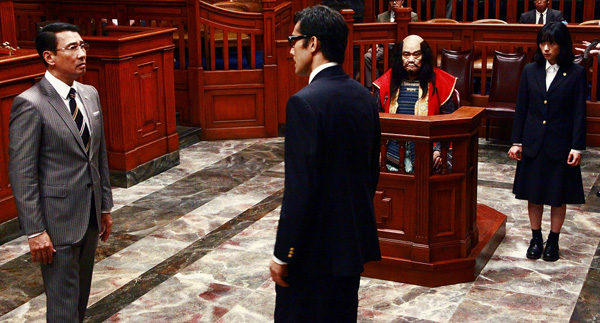 Eri Fukatsu, right, plays Emi, a third-rate lawyer who puts a ghost on the stand to prove her client’s innocence, in the new film “Once in a Blue Moon.”Provided by Mountain Pictures

A quirky new Japanese comedy, directed by Koki Mitani, puts a ghost in a courtroom as the only witness of a mysterious crime. The film, which centers on the murder of a rich woman at a haunted inn, topped the Japanese box office for four consecutive weeks after its debut in October. 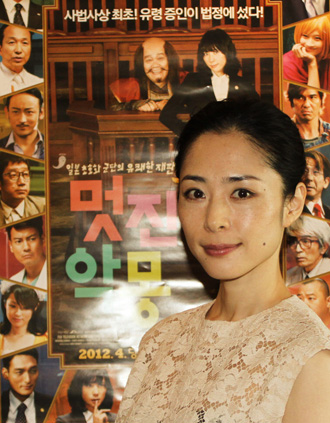 “Once in a Blue Moon” is the fifth feature film for screenwriter, actor and film director Mitani, often referred to as the “king of comedy” in Japan. His previous award-winning films, including “Welcome Back, Mr. McDonald” (1997) and “University of Laughs” (2004), have been praised for their off-kilter wit and sharp comedy.

Mitani said that he came up with the plot of this film 10 years ago while he was walking his dog. He added that from the first day, he had Japanese actress Eri Fukatsu in mind for the lead role of Emi, a third-rate lawyer who tries to defend her client by putting a ghost on the stand. The 39-year-old actress is one of the most popular actresses in Japan, first gaining attention with her role in the hit TV series “Bayside Shakedown” during the 1990s, which later became a full-length film. Fukatsu’s roles on TV and film have ranged from the comedic to the dramatic, winning her numerous awards in her country and abroad, including best actress at the 2010 Montreal World Film Festival for “Villain” (2010). Before the opening of “Once in a Blue Moon” in Korea on Thursday, Fukatsu visited Seoul and spoke with the JoongAng Ilbo about the new film.

Q. It feels like it’s been a long time since a light Japanese comedy came out in theaters.

A. We held the Japanese premiere events for the film in the regions of the country that were affected by the March 11 earthquake last year. It was a good feeling to hear audiences there laugh and enjoy the film. The opening for “Once in a Blue Moon” was delayed by a year, meaning that the premiere happened to coincide with the earthquake, so in a way, I feel that it is this film’s destiny to provide laughter for the Japanese people at this difficult time.

In your last film “Villain,” you played a serious, quite depressing character.

Yes. She was a very lonely woman who ran away with a murderer. This time, I did a comedic turnaround. For comedy, if you get the timing wrong even slightly, what you do is no longer funny. So I tried my best not to think too much about timing and just focused on keeping my natural pace.

I am not too interested in those things. Toshiyuki Nishida [one of the most popular comedy actors in Japan] played the ghost in our film, and he is such a warm, lovely actor that I sometimes thought to myself, “Is that what ghosts are really like?” [Laughs]

Can you name any particularly memorable scenes from the film?

When we were shooting the scene where I go to the inn in the mountains to meet the ghost, all of a sudden, it started to rain. This wasn’t in the script, but I suggested that we shoot with the rain because I think the rain expressed the misery of my character well.

You are most known among Korean fans for your role in “Bayside Shakedown.” Can you talk a little about that?

That series has been an ongoing project for 15 years, and this September, the final installment will come out. The series followed me through my 20s and 30s, and I think the same thing is true for many of its fans. A single woman who saw the first episode is probably a mother by now.

You have worked with top actors including Takuya Kimura, Yuji Oda and Satoshi Tsumabuki. What are the most charming aspects of these stars?

I think these actors have charming eyes, and through their eyes, you can see their strengths. That is all I’m going to say.

You have played a lot of emotionally complex roles. Why do you think that is?

I prefer to play characters that have conflicting parts to them. In 1988, when I first started acting, I played a man. I think from then on I enjoyed playing characters who weren’t quite my everyday self.

How would you rate Mitani’s performance as a director?

He has said that the reason he creates comedies is because he drew strength from watching other comedic works during difficult times in his life. I think his biggest appeal is that you never know what exactly he is going to do next. Who else but Mitani could make a film about a ghost who testifies in court?