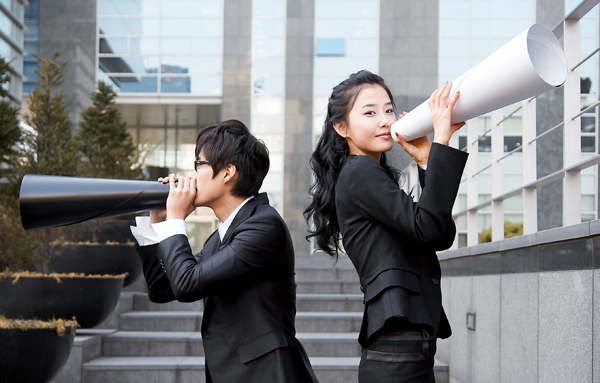 It isn’t just local companies and their foreign partners that are suffering from linguistic and cultural clashes these days.

Korean colleagues of different generations are also finding it harder to get along as years of rapid economic development and the embrace of Western ideas - among other factors?- grate with the country’s respect-bound Confucian values and traditional way of conducting interpersonal relations at work.

Employees of Samsung Life Insurance’s Busan branch engage in a role-playing game called Ya Ja Time that is popular at camps organized by the company to boost communication among colleagues of different ages. Provided by the company

Jung, a 29-year-old assistant manager at the marketing department of Samsung Life Insurance, said she sometimes feels like she is banging her head against a brick wall when she talks to her senior colleagues due to this yawning gap.

“Mr. Kim, you look so ganji today!” Jung recalled saying to her team manager recently, using a popular slang term similar to the word “cool.” Unexpectedly, the man, who is in his 40s, snapped back that he did not understand what she was referring to and demanded an explanation. 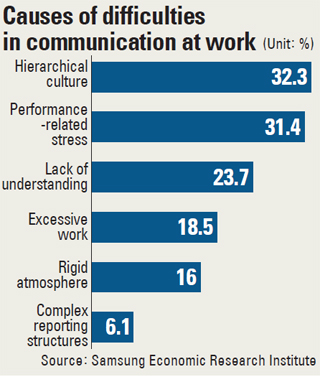 While the term, derived from the Japanese word for “feeling,” is considered trendy among Koreans in their 20s and 30s, it may sound impolitely informal to older people - most of whom would not catch the intended meaning.

Such scenes are becoming increasingly common at workplaces where new iPad-toting college graduates mingle with people who were born just after the end of the 1950-53 Korean War for up to 12 hours a day.

Due to rapid lifestyle changes and developments in the IT field, the gap between the old and the young is widening more than ever. Young people like to coin new words and spread them across the Internet and social networking sites, and older people have difficulty catching up.

Aware of such problems, many businesses are making efforts to boost communication between different generations of employees to improve efficiency at work and maximize output.

Samsung Life Insurance is holding two-day camps every weekend from February through October this year. A total of 6,000 employees from different departments are divided into 900 teams of seven members - two in their 20s, three in their 30s and two in their 40s - and get to spend two days together enjoying leisure sports.

One of the camp programs is the traditional role-playing game Ya Ja Time, in which players pretend to switch their ages and roles, and chat with the aim of better understanding one another’s point of view. During the game, young people remove honorific expressions when talking to their seniors, but the older people must humble themselves by referring to their younger associates using highly respectful terms.

“Playing this game has helped me understand what my boss would feel in a certain situation,” said one entry-level employee who attended the camp last month.

The camp is the brainchild of Samsung Life CEO Park Keun-hee, who believes that internal communication is important to foster closer ties with clients and enhance the company’s overall competitiveness.

According to a survey by Samsung Economic Research Institute, about 32 percent of over 900 executives and employees at major businesses here said Korea’s hierarchical system based largely on age often hinders communication among colleagues.

Some 31 percent of respondents said employees are indifferent to one another. About 17 percent said senior-level employees are unwilling to communicate with others lower down the ladder, the poll showed.

“An office where members talk to each other can obtain better achievements,” the institute said.

Subsidiaries of Hyundai Group, famous for its rigidly hierarchical corporate culture, are also making efforts. Hyundai Elevator CEO Han Sang-ho reportedly holds meetings frequently with different groups of employees to have informal chats in order to better understand them. “He tries to come up with various ideas to get to know us. For example, we even eat samgyeopsal, or pork belly, with him, which is very informal,” said one official.