North fires rocket but it explodes right after lift-off

North fires rocket but it explodes right after lift-off 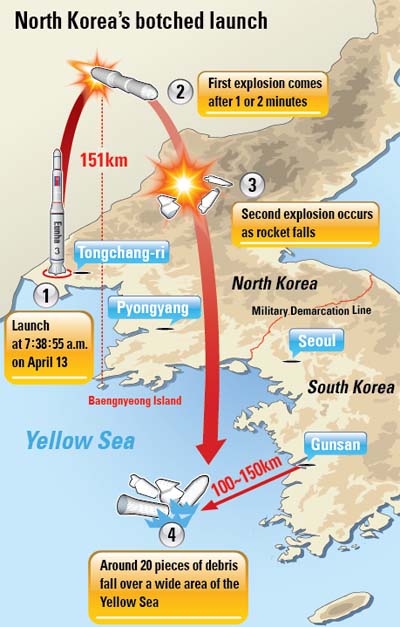 Despite its failure, the international community condemned the launch as a provocation.

The United Nations Security Council was scheduled to convene late yesterday to discuss additional penalties against the North for the launch, which was prohibited by a Security Council resolution.

Within minutes after lift-off, Seoul, Tokyo and Washington declared the launch a failure and that more than 20 pieces of debris had landed in the Yellow Sea. 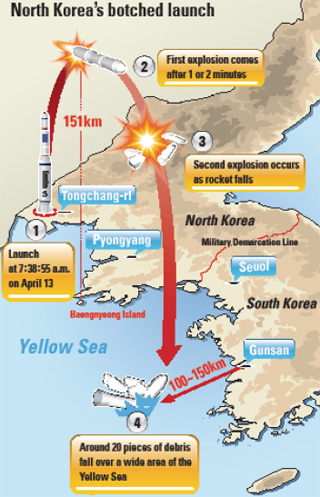 Unidentified North Korean officials, left, are questioned on the rocket launch by journalists before the start of a news conference in Pyongyang yesterday. North Korea’s long-range rocket exploded over the sea a few minutes after its launch yesterday, dealing a blow to the prestige of the impoverished state. [YONHAP]

The North conceded later that the launch from the Sohae Satellite Launching Station at 7:38:55 a.m. had indeed failed. The North claimed it was trying to put its first application satellite into space.

“The earth observation satellite did not succeed at entering into orbit,” the North’s official Korean Central News Agency reported yesterday afternoon. “Scientists, engineers and experts are currently looking into the cause of the failure.”

Since early last month, North Korea said that it would launch the Unha-3 rocket between April 12 and April 16 to put a Kwangmyongsong-3 satellite into orbit for crop- or weather-related research purposes. The South, the U.S. and many other countries regarded the launch as a disguised test of a long-range missile to ultimately carry weapons of mass destruction, like a nuclear warhead. The Unha-3 is seen as the same kind of ballistic missile the North has been trying to develop since the late 1990s.

The North invited a group of foreign journalists to the launch site in Tongchang-ri, North Pyongan. The journalists, however, said they were not allowed to witness the lift-off yesterday.

The South Korean defense ministry said the rocket exploded within one or two minutes after lift-off and separated into around 20 pieces. Whether the first-stage propellant separated from the rest of the rocket was still under investigation, it said.

Shin Won-shik, a senior official of the Ministry of National Defense, told a media briefing that the rocket reached an altitude of 151 kilometers before starting to fall. The debris fell around 100 to 150 kilometers off the South’s west coast, he said.

Some defense researchers in the South speculated the explosion was caused by the leaking of fuel or oxidizing agents in the rocket. The South Korean military launched a salvage mission to collect the debris.

The launch prompted the South Korean government to issue an evacuation alert for people residing near the inter-Korean border.

After the launch, the Blue House convened a security-related ministers’ meeting. The Foreign Ministry also convened an emergency countermeasures meeting.

The government also formed an emergency economic task force comprised of six economy-related government agencies including the Finance Ministry, Financial Services Commission and the Bank of Korea to monitor and analyze the economic impact of the launch.

Foreign Minister Kim Sung-hwan had a telephone discussion with U.S. Secretary of State Hillary Clinton yesterday, in which they agreed that the launch, despite its failure, violates UNSC Resolution 1874, which prohibits the North from launching long-range ballistic missiles, an official of the Ministry of Foreign Affairs and Trade told reporters. Kim was planning similar teleconferences with foreign ministers from Japan, China, Russia and some other countries later in the day, the official said.

“We will put it up for discussion at the UNSC,” the official said. “We need to send a clear and strong message to North Korea.” The UNSC said on its Website that it will meet in an emergency session at 10 a.m. Friday, or 11 p.m. yesterday Korean time, to discuss countermeasures to the launch.

In a statement, White House spokesman Jay Carney said that the “provocative action” contravenes the commitments the North made in a Feb. 29 deal with the U.S., in which it promised suspension of nuclear tests, long-range missile tests and the workings of its uranium enrichment program at Yongbyon in return for U.S. food assistance. “North Korea is only further isolating itself by engaging in provocative acts,” he said.

The foreign ministers of the influential G-8 countries also condemned the launch after a meeting in Washington Thursday.

“We are ready to consider, with others, taking measures responding to all activities of the DPRK that violate UN Security Council Resolutions, and calling for appropriate response by the United Nations Security Council,” the ministers said in a statement, referring to the North by its official name, Democratic People’s Republic of Korea.

Russia, one of the G-8 countries, also denounced the launch as a violation of the UNSC resolution, Interfax news agency reported yesterday, quoting a Russian Foreign Ministry official. Japan’s Chief Cabinet Secretary Osamu Fujimura also condemned the launch as a grave provocation to his country and other countries.

In Seoul, a group of North Korean defectors and South Korean activists working on North Korean human rights issues held a press conference denouncing the launch, saying the money used for it should have been spent on feeding North Koreans.

“It is time to respond strongly to the North Korean regime’s extortion strategies,” they said in a statement.

China, the North’s closest ally, called for restraint from all sides.

“We hope all relevant parties can maintain calm and restrained and refrain from acts that would harm peace and stability on the Peninsula and in the region,” China’s foreign ministry spokesman Liu Weimin said in a statement.

South Korean officials recently warned that North Korea could follow up the launch with a third nuclear test. Its two previous tests in 2006 and 2009 took place within one to three months after missile launches. Seoul’s top nuclear envoy Lim Sung-nam called his U.S. counterpart Glyn Davies after the launch, a Seoul official said.

“We are keeping a close watch over the North for further provocative acts such as missile tests and a nuclear test,” an official of the Ministry of National Defense in Seoul said.

It remains unclear how the botched rocket launch may affect the North’s new leader, Kim Jong-un. Yesterday, he was named First Chairman of the powerful National Defense Commission at a meeting of its assembly, where his late father Kim Jong-il was honored as the commission’s chairman for eternity, according to North’s KCNA. On Wednesday, the untested young leader was appointed the “first secretary” of the Workers’ Party.

The North, straining to meet its self-pronounced goal of becoming a “strong and prosperous” country this year, is also planning a large military parade in Pyongyang on Sunday, which marks the 100th birthday of Kim Il Sung, the North’s founder and Kim Jong-un’s grandfather.