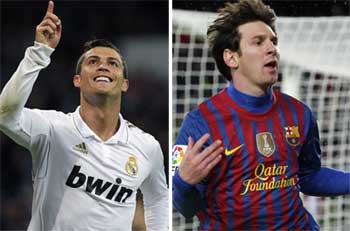 Messi converted the 72nd-minute spot kick to give Barcelona a 2-1 victory and equal rival Ronaldo, who set the record with a 74th-minute header in Real Madrid’s 3-1 victory over Sporting Gijon.

Messi had trailed Ronaldo by two goals going into the match and curled home a 64th-minute equalizer to close the gap to one.

Football’s biggest rivals gave the Spanish league its first-ever pair of players with 40-plus goals in a season, and it was the first time the feat had been achieved since 1930-31 when Aston Villa’s Pongo Waring and Sheffield United’s Jimmy Dunne passed the 40-goal mark.

Ronaldo matched his overall goal tally from last year after reaching 53 goals, while Messi’s 63 goals in all competitions is the most in European play since Bayern Munich’s Gerd Mueller scored 67 during the 1972-73 season.

The goals ensured Madrid maintained its four-point lead over three-time defending champion Barcelona before next Saturday’s El Clasico match between the bitter rivals, which could prove crucial in the title race with only four more games remaining after that.

“Things are going well, but the most important thing is for the team to do things well, and we’re right in there for the league,” Messi said after matching former Brazil striker Ronaldo and Mariano Martin’s record run of scoring in 10 straight league games.

Ronaldo, meanwhile, has scored 138 times in 137 appearances for Madrid since joining from Manchester United in 2009. Ronaldo’s header also helped Madrid reach 107 goals on the season to match the record mark set during the 1989-90 season.

“For those who say Mourinho is a defensive coach, the numbers aren’t bad,” said Aitor Karanka, Madrid assistant.

The pair of world player of the year winners can add to their overall season tallies in the Champions League this week as Madrid plays at Bayern Munich and Barcelona at Chelsea. AP