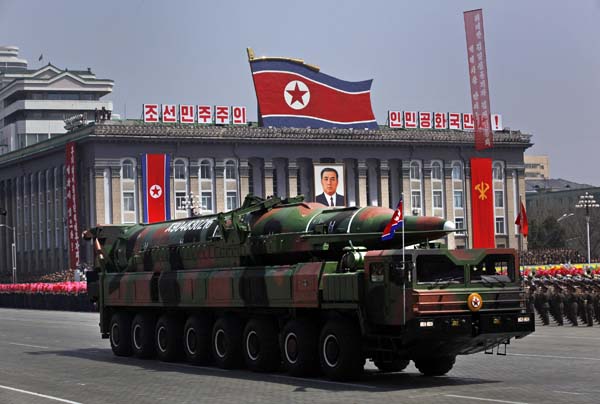 North Korea displays what appears to be a new intercontinental ballistic missile with a longer range than its existing missiles during a massive military parade in Pyongyang’s Kim Il Sung Square yesterday. [AP/YONHAP]

Two days after its failed test of a long-range rocket, North Korea celebrated the 100th anniversary of its founder’s birth yesterday, with leader Kim Jong-un reviewing a massive military parade and giving his first public speech.

The events were broadcast live with the apparent intention of signaling, both domestically and internationally, the official beginning of the Kim Jong-un era. 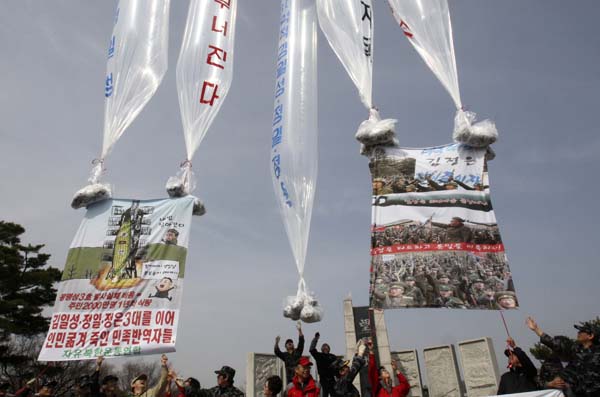 North Korea displays what appears to be a new intercontinental ballistic missile with a longer range than its existing missiles during a massive military parade in Pyongyang’s Kim Il Sung Square yesterday. [AP/YONHAP]

Marking the centennial anniversary of the birth of Kim Il Sung, the North’s founder, eternal president and grandfather of the current leader, a massive military parade was held at Kim Il Sung Square in Pyongyang yesterday morning. At its start, Kim, who was appointed as first secretary of the Workers’ Party and first chairman of the powerful National Defense Commission last week, gave a 20-minute speech. The event was broadcast live by the North’s state-run media, and it was the first time his voice was heard by the people he rules over.

“A weak country of the past has now transformed into a powerful political and military nation,” Kim said. “Our people have earned independence and dignity that no one dares to touch.”
Another highlight of the parade was a display of arms including what appeared to be a new long-range missile. “It was never test-fired, so we are not sure if it was operationally deployed,” a military source said.

The North unveiled 880 units of 34 kinds of arms, the largest display of weaponry ever in one of its parades. Before, the largest exhibition was in 1992 to celebrate the 60th anniversary of the military’s founding.

The new missile was believed to be an intercontinental ballistic missile with about a 2-meter (6.6-foot) diameter and a more than 18-meter length. It was estimated to have a range longer than the North’s midrange Musudan, which has a range of up to 4,000 kilometers (2,485 miles). “The new missile was longer than the Musudan, so it could have a range of up to 6,000 kilometers,” another military official said. 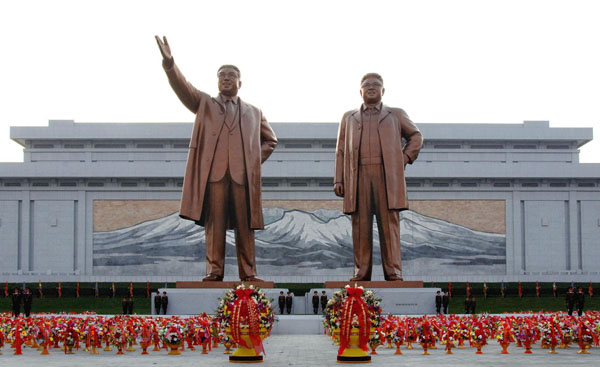 In his speech, Kim said the transformation of North Korea was due to the achievements and legacy of his grandfather Kim Il Sung and father Kim Jong-il, calling them the pioneers and leaders of the North’s “military-first revolution.” He also vowed to uphold the instructions of his father and praised the military’s devotion, urging the North to unite by dedicating their lives to the military-first revolution.

Kim also addressed comments to Koreans outside North Korea’s borders. “I am sending warm gratitude to fellow Koreans in South Korea and overseas devoting everything to the grand patriotic project of unification, prosperity and power for their homeland,” Kim said.

Kim concluded his speech with the phrase, “Forward for the final victory!” The crowd cheered.

Following the speech, Kim inspected troops from the Army, Navy and Air Force as well as the Worker-Peasant Red Guards and Red Young Guards. It was the first appearance of the Red Guards, which are reserve forces, at a major event in 18 months. Troops on horseback and mechanized units followed. The parade continued for about two hours, and top North Korean officials from the government, party and military attended the event with Kim. 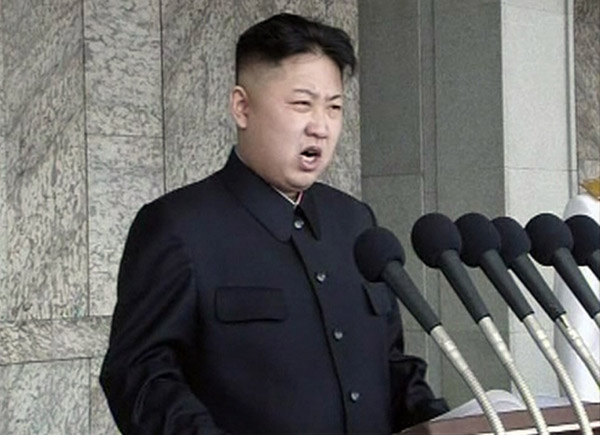 Although the People’s Army celebrates the 80th anniversary of its founding later this month, the Kim regime chose to host the military event yesterday.

Yesterday’s event also gave a glimpse of the little-known, young leader’s style. Although he upheld his father’s military-first policy, he made a surprise decision to give a 20-minute public address, a stark contrast to his father. Kim Jong-il’s voice was heard publicly only for about five seconds when he shouted, “Glory to the heroic Korean People’s Army!” at a celebration of the People’s Army founding in 1992.

Dressed in a black uniform, Kim addressed his people in a low but confident voice, moving his body slightly on the podium while his eyes remained fixed on his notes. He may have been trying to adopt his grandfather’s style; when he was alive, Kim Il Sung personally delivered an annual new year address.

Kim Jong-un made some decisions that his father wouldn’t, such as inviting some foreign media to watch Sunday’s celebrations and get an advance look at the rocket that exploded on liftoff Friday (although they didn’t get to witness the launch). In a surprise move, the North was also quick to admit that the rocket failed to lift a satellite into orbit, which they said was its mission. The admission came only hours after the rocket exploded in midair minutes after liftoff. The international community believes its mission was to test a three-stage missile capable of traveling to another continent.

Over the weekend, Kim also carried out a slew of promotions in his government and military.

According to the KCNA, three new members were appointed to the National Defense Commission on Saturday: Choe Rong-hae, a top political officer of the military; Kim Won-hong, head of the State Security Department; and Ri Myong-su, the public security chief.