In with the old, out with the new

In with the old, out with the new 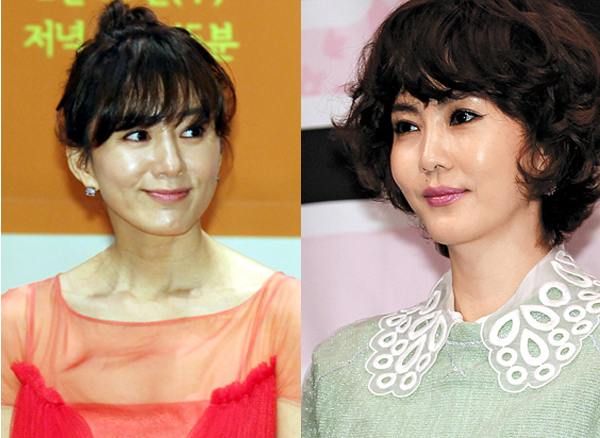 Actresses in their 20s, who once dominated K-dramas, are hard to come by on the small screen, as of late. Experienced actresses in their 30s, 40s and even 50s have held on to the spotlight, reversing a trend that dictated casting for decades. Above left, Kim Hee-ae, 45, plays a lead role in JTBC’s “A Wife’s Credentials” and above right, Kim Nam-joo, 41, plays a lead role in KBS2’s “You Who Rolled In Unexpectedly.” [JoongAng Ilbo]

Back in the 1980s and ‘90s, Korean dramas adopted the principle “the younger, the better” when casting heroines. Heartthrob actors in their 40s were often coupled with youthful beauties in their early 20s, at the expense of more experienced actresses.

But as of late, the trend has been reversed, with the average age of star actresses on the small screen shooting up to 33.4, according to a JoongAng Ilbo analysis of 20 drama series on national network and cable channels. Only five shows cast a lead actress in her 20s, while the other 15 feature actresses in their 30s and 40s.

Ten years ago, the scene was starkly different. Many veterans such as Kim Hye-ja (“Since We Met” from 2002) expressed disappointment in switching to supporting roles - typically playing mothers or aunts - as younger, less experienced actresses stole the spotlight.

Familiar names today including Kim Hee-sun, Jun Ji-hyun, Song Hye-kyo, Son Ye-jin, Kim Min-hee and Kong Hyo-jin all debuted in this era when they were in their early 20s.

But today, now established actresses, they are holding on tight to their stardom.

“Dramas that portray the lives of working women in their 30s and 40s are getting more attention from viewers,” said Kim Sung-geun, a chief producer of “You Who Rolled In Unexpectedly,” which is one of the most popular drama series today, claiming a 30-to-35-percent share of the audience on average.

The hit drama centers on a working woman named Cha Yoon-hee (played by Kim Nam-joo) as her husband, who was put up for international adoption, reunites with his biological parents. With a new family right next to her, Yoon-hee faces an unexpected burden stemming from her new relationship with her in-laws.

According to experts, the shift represents a larger trend in Korean culture, mainly a reflection of women marrying at a later age and working more in their 20s.

But another catalyst can be found in so-called pretty boy craze that was sparked by the 2009 massive hit series “Boys over Flower.” While younger actresses are hard to come by on the small screen, many rising young actors are replacing their predecessors.

“The main target audience of these drama series is made up of women, which means there are more of pretty and handsome male characters to entice female viewers,” said drama critic Gong Hee-jeong.

Lee Seung-gi, 25; Yu Ah-in, 26; and Kim Soo-hyun, 24, are just a few of the up-and-coming actors taking K-dramas by storm. Recent series such as “Flower Boy Ramen Shop,” “Shut Up Flower Boy Band,” “The Moon Embracing the Sun” and “Rooftop Prince” have all featured a majority of male characters.

These competing trends have often matched up actresses in their 30s with younger men in their 20s, couples seldom seen on Korean television two decades ago.

In addition to the pretty boy craze, structural changes have pressured the prevalence of veteran actresses on screen.

“Each broadcaster used to have a teen drama back in the ’80s where newbies could make a name for themselves, but this no longer exists,” Kim from “You Who Rolled In Unexpectedly” said.

“I think it is part of the reason why we don’t see that many young actresses.”

The emergence of idol singers in K-dramas has also taken away opportunities for younger actresses. Yoona, Yuri, Eun-jeong and Uee, all are members of different K-pop girl groups, have dominated recent drama series.

“Most idol singers learn how to sing, dance and act before they debut,” said an official from a major entertainment company. “Production companies also want them to be part of drama series due to the recent Korean Wave craze.”

Featuring K-pop singers has provided a major boost to drama ratings, according to industry insiders. Rising actresses, however, are getting the short end of the stick.