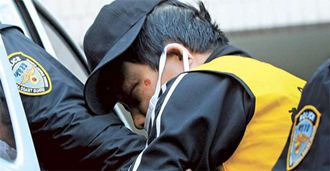 INCHEON - A local court yesterday sentenced a Chinese boat captain to 30 years in prison for killing a Korean law enforcement officer during a crackdown on illegal fishing last year.

The Incheon District Court also ordered Cheng Dawei, the 43-year-old captain, to pay 20 million won ($17,572) in fines for the killing of the Coast Guard officer, which reignited public anger at the Chinese fishermen’s use of violence against Korean Coast Guard officers.

Cheng was charged with killing Coast Guard Corporal Lee Cheong-ho with a knife and seriously injuring another officer during a Dec. 12 raid on his boat, which was suspected of fishing illegally in Korean waters off Incheon, west of Seoul.

Prosecutors sought capital punishment for the captain, who admitted to the murder shortly after his arrest.

The court also sentenced eight other Chinese fishermen from the same vessel to prison terms ranging from one and a half years to five years for obstructing the Coast Guard officers in the course of their duty.

“One officer’s loss of life and another’s serious injury brought shock, sadness and anger not only to the families of the officers but also to the entire nation,” the court said in its ruling.

“A firm call to responsibility is unavoidable if only to prevent a repeat of other illegal activities and more tragedies they could lead to.”

Another Coast Guard officer was beaten to death by Chinese fishermen during a crackdown on illegal fishing in September 2008.