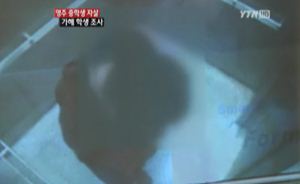 The 14-year-old middle school boy surnamed Lee who jumped to his death from a 20-story apartment building in Yeongju on Monday was categorized as a high suicide risk, but the two counselors who are responsible for the students at his school had no idea the boy was suicidal.

The school has come under stinging criticism for neglecting the student.

When the boy died, the school said that they had a consultation scheduled to discuss his school life, but that has turned out to be a lie created by the school to avoid public’s criticism.

The Yeongju Police Precinct in North Gyeongsang interrogated counselors who were assigned to the boy in 2011 as well as counselors for the 2012 academic year, and found that he participated in consultation sessions last year.

But the two new counselors weren’t aware that he was categorized as a high suicide risk after a psychological test conducted by the school in May 2011.

The police said that students with a record like Lee’s are treated more seriously, but somehow his record wasn’t transferred to the new counselors.

He didn’t receive care from his school this year, which indicates that the school was not taking students in trouble seriously.

“He’s not the type of boy to commit suicide,” a counselor surnamed Mun who counseled Lee in 2011 told the JoongAng Ilbo. “Once he knew that he could talk about any problems with me, he frequently visited me and shared his worries. I thought he would be fine because he was getting better last year.”

The police added that were seven students categorized as at a high risk for suicide at the school, and the boy was one of them.

The police also secured testimonies from assailants, including his 14-year-old classmate surnamed Jeon, who was pinpointed by Lee as the lead bully. The police said that Jeon, in fact, had bullied Lee since the 6th grade.

The police said that the two were classmates in 6th grade and were separated in the 7th grade (last year), but became classmates again this year. The police said Jeon formed a student gang with nine other boys when he was a 6th grader and bullied more than a dozen students in the last two years.

“Jeon and his gang members frequently extorted money from Lee in person or blackmailed him through text messages to bring more money to buy his parents’ birthday gifts,” a spokesman for the Yeongju police told the JoongAng Ilbo. “He also hurt Lee frequently, poked his back with pencils and slapped the back of his head for fun. He sometimes even bullied his own members, attacking them on 20 to 30 different occasions since July last year to get them to extort money from Lee and other students.”

The police added that Jeon is about 171 centimeters (5.6 feet) tall and weighs 110 kilograms (244 pounds). They said he has been a terror to his classmates.

“I regret my behavior,” Jeon told the police during the interrogation. “I just did it because it was funny but never imagined that it would take someone’s life. I really feel sorry for him and his parents.”

The police also has revealed that the boy actually hesitated to commit suicide. They found CCTV footage that showed him wandering around the hallway of his apartment building for about an hour and 20 minutes. He crawled out the window and as he was hanging from the window frame, he cried out for help.

“As soon as I saw the boy asking for help I went back inside my house to call my cousin, but he was gone by the time we returned to the hallway,” the woman told the police.