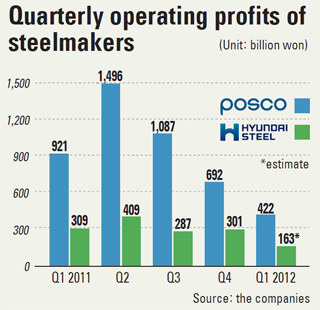 Korea’s steel industry is in deeper trouble than was previously realized, Posco announced yesterday as it released its first quarter performance

“The sales and OP declined from the previous quarter as high-priced materials that were contracted last year were supplied this year,” said Posco’s Executive Director Park Ki-hong.

The steelmaker’s quarterly operating profits used to be around one trillion won. However, its earnings have almost halved from a year ago as Europe’s debt crisis has helped shrink global demand and raw materials have shot up.

Hyundai Steel, the runner-up in the industry, also predicts a decrease in earnings. According to forecasts by securities firms, the second-largest steelmaker is expected to record about 160 billion won in operating profit. It plans to announce its Q1 performance next week.

Posco was not able to raise the prices of its steel products in line with rising prices of raw materials, market observers said. The prices of major raw materials for steelmaking, coal and iron ore peaked in the second and third quarters of last year.

Meanwhile, prices of thick plates for shipbuilding and construction dropped by about 80,000 won per ton due to oversupply. Cheaper steel from China has caused the global price to slide, while building up inventories.

Demand for steel products has taken a nosedive since the global credit crunch in 2008. The recent euro zone crisis has exacerbated the problem.

More than 50 percent of Korea’s steel production is shipped to the construction and shipbuilding industries worldwide, according to Posco. However, its two big clients have both cut spending on steel materials.

On Thursday, Posco CEO Chung Joon-yang said steelmakers are suffering more difficulties than shipbuilders, at a meeting with Knowledge Economy Minister Hong Suk-woo. Chung implied that Posco is feeling the brunt of costly materials, as it has not been able to push up its prices.

“As steelmakers import all the raw materials needed for production from abroad, in order to survive, we need to pass on the rising prices of imported materials to our clients,” Chung said.

Financial analysts have released positive outlooks for the steel industry in the next quarter.

“Relatively low-priced iron ore will be put into production in the second quarter, and this will help ease the financial burden steelmakers are feeling due to expensive raw materials,” said Hong Chan-yang, an analyst at Shinhan Securities.

In the first quarter, the steelmakers had to use up raw materials whose prices peaked last year.

Posco raised its export prices for some hot-rolled steel products earlier this month. It also plans to increase domestic prices by 50,000 won per ton in the third quarter. This will help the company restore profitability, Hong said. Earlier, Hyundai Steel also hiked its prices by 30,000 won per ton.

However, others in the financial market say it is too early to anticipate a recovery. China accounts for most of the demand in Asia and its appetite is expected to remain steady due to Beijing’s austerity plan.

“Korea’s steelmakers are expected to see slow improvements in the next quarter, but it will be hard for them to return to their normal levels of earnings,” said Park Hyun-wook, an analyst at HMC Investment Securities.

“The sale of shares was intended to improve fiscal soundness amid lingering uncertainties in the market,” the company said in a statement.

Posco plans to limit its investments this year but it will keep spending on businesses related to steel production. It has targeted sales of 37.7 trillion won this year.