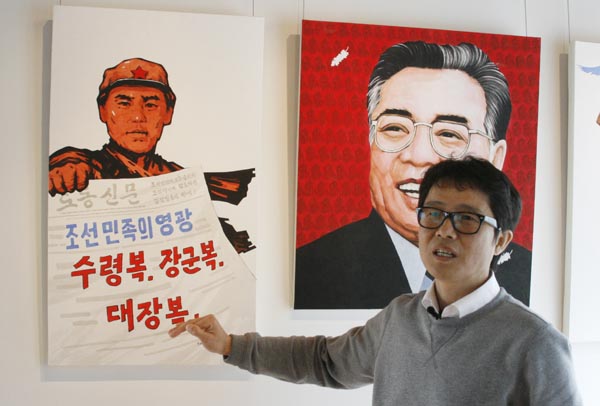 North Korean defector and artist Song Byeok explains the meaning behind one of his paintings displayed at The Dunes gallery in Washington. By Lee Sang-bok


WASHINGTON - A former artist of North Korean state propaganda, Song Byeok, is showing 21 acrylic paintings for the first time at The Dunes gallery in Washington until April 30.

Now living in South Korea, the 43-year-old painter is enjoying the artistic freedoms he was forbidden in North Korea and now draws paintings depicting North Koreans and their lives in the impoverished country while at the same time satirizing the late North Korean leader Kim Jong-il.

Song is recognized as the first North Korean defector to come to South Korea and make his living as an artist. He has captured the attention of South Koreans with his satirical works for quite a while. However, the artist said that the decision to exhibit his paintings abroad in the U.S. for the first time was not an easy one to make, but in the end, he decided to show his works internationally in order to help his fellow North Koreans.

“Thinking about North Koreans, I always felt sorry about enjoying freedom by myself,” Song said. “But through this exhibition, I hope the international community will acknowledge the devastating situation in North Korea and reach out to help.”

For seven years, Song served as an official propaganda painter for Kim Jong-il’s totalitarian regime. The artist said that he lost his faith in the regime when famine struck the nation during the late 1990s, revealing the government’s inability to deal with basic necessities.

To secure some food in China, Song and his father decided to cross the Duman River that separates China from North Korea, but his father drowned and Song was captured, brutally tortured and forced into hard labor at a prison camp. Song was tortured at the hands of the regime he once glorified and praised in his works.

It was in 2002 when Song decided to leave North Korea for good, and his passion to draw aided him in successfully reaching South Korea, where he studied oriental painting at Kongju National University and Hongik University’s Graduate School of Arts.

Hope, humor and freedom are the main themes of Song’s paintings and can be seen in one of his most notable works, “Take Off Your Clothes.”

In the work, late North Korean leader Kim Jong-il is wearing Marilyn Monroe’s exposing white dress while striking her classic pose over a subway vent updraft. Kim’s strikingly humorous facial expression is something to laugh at, but Song said there is a deep meaning as to why he added Kim’s face onto the famous Monroe pose.

In the painting, Kim is holding his white dress to block the subway gusts, but this is not the end of the story. In the same sense, Kim tried to hide the real world from North Koreans, Song said.

Many of Song’s other paintings feature soldiers in uniform, all of whom have their eyes shut.

“I want to give North Koreans a wake-up call and tell them to open their eyes now,” Song said.

The artist said that he does feel threatened sometimes after displaying his works in public but that his next goal is to try to alert the world to the problems faced by North Koreans.

“You can’t do anything if you think about those things,” he said. “A genuine artist should not be afraid of death.”