A brotherly love that even war couldn’t kill

A brotherly love that even war couldn’t kill 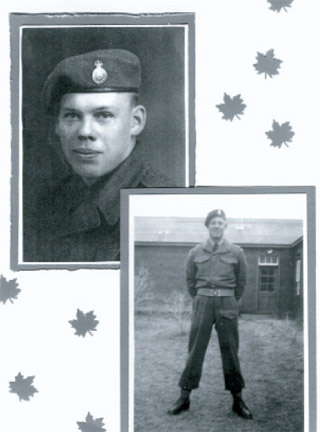 The photo of Joseph William Hearsey, left, and the photo of younger brother Archibald Lloyd Hearsey, right. Provided by the Ministry of Patriots and Veterans Affairs

The family of a Canadian Korean War veteran who died last year will bring his ashes to Korea tomorrow to fulfill his final wish: to have them buried with those of his older brother, who took his place in a battle in Gapyeong, Gyeonggi, in 1951 and was fatally wounded.

Around 20 relatives of Archibald Lloyd Hearsey will be accompanied by more than 50 fellow Korean War veterans from Canada who helped arrange the emotional pilgrimage, according to the Canadian Embassy in Seoul and the Korean government.

The remains of Joseph William Hearsey, Archibald’s elder brother, have been interred at the United Nations Memorial Cemetery in Busan since Oct. 27, 1951, two weeks after he died in battle, according to the Ministry of Patriots and Veterans Affairs.

On Wednesday, the remains of Archibald will join them after many in Korea and Canada worked to fulfill his wish, touched by the story of sacrifice and a brotherly devotion that trumped death.

Born in Ignace, Ontario, in 1929, Archibald joined the Canadian Armed Forces on Sept. 5, 1950. His Princess Patricia Light Infantry 2nd Battalion was sent to the Korean War, which had broken out three months earlier.

According to the families and those who knew the brothers, Joseph, who was one year older than Archibald, became concerned about the safety of his younger sibling.

Without informing him, Joseph quit his job at Canadian Pacific Rail to join the same battalion as his younger brother on Jan. 6, 1951.

After training, Joseph was dispatched to the front line while Archibald was at the rear. Continuous fighting kept the brothers from communicating with each other over the following months and Archibald was never informed that his older sibling was fighting with him in the same battalion, said friends of the family.

In October 1951, a battle took place on a hill in Gapyeong and Joseph was assigned to a defensive position in a foxhole that his brother was originally supposed to occupy, those with knowledge said.

The battle lurched on for several days, and on Oct. 13, 1951, Archibald was reassigned to the front line. When he arrived, soldiers started shouting to him: “Your brother is here!” It was the first time he realized his sibling was in Korea.

He followed the voices to the foxhole where he found Joseph dying from a shot through the shoulder, family members said. Archibald held Joseph in his arms and watched as his brother’s life ebbed away.

The details of this story are based on what Archibald or his fellow soldiers told the Hearsey family and the exact military service records of the two brothers in Korea require confirmation from the Canadian government, which the Korea JoongAng Daily couldn’t get by deadline. The Ministry of Patriots and Veterans Affairs and the Canadian Embassy in Seoul keep no such records.

However, Leo Demay, director of international affairs at the United Nations Memorial Cemetery in Busan, who helped arrange the joint burial, says the story is reliable.

Until he died last June, Archibald’s life was “haunted by the memory of that fateful night,” said Demay.

“Joseph had lived in his dreams and nightmares throughout the years,” said Demay, repeating what he heard from Archibald’s family.

Archibald left a will that asked his daughter, Debbie Kakagamic, to find a way to have his ashes brought to Korea so he could be reunited with Joseph.

The ministry agreed to pay for accommodations and half the air fares for the Canadian participants in the ceremony. The remaining costs for the families will be covered by contributions from Korean War veterans of Canada, some of whom fought alongside the Hearsey brothers.

“This is the first case of two foreign family members who were both Korean War participants being buried at the UN Cemetery in Korea,” said Lee Young-min, an official at the ministry.

The ministry will host a memorial service for the brothers at the cemetery at 3 p.m. Wednesday, followed by the joint burial at 3:40 p.m., which will be hosted by the Canadian embassy in Seoul. “Many people from many countries showed up here in Korea without knowing what Korea really was at the time,” Demay said. “They wanted to defend a country they knew nothing about.” Around 26,000 Canadians fought for South Korea during the Korean War and 516 were killed in action, said the embassy.