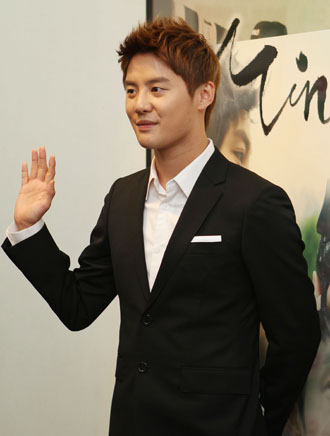 JYJ’s Kim Jun-su will hold his first solo concert on May 19 and 20. According to CJeS Entertainment on Friday, Kim will entertain more than 17,000 fans at Olympic Hall in Jamsil, southern Seoul.

The tickets for the show went on sale from Thursday night and were sold out within five minutes.

Earlier last week, Kim announced that he will release his first debut album in mid-May. After the album’s release, the star is set to make a tour of six places in Asia.

The singer played an integral role in the production and composition of many of the songs in the upcoming album, which is comprised of a diverse range of genres that includes dance and R&B.

“We won’t reveal the album’s concept or title just yet, but we anticipate that the record will be one of the best K-pop albums to be released in the first half of this year,” the agency said.

The boy band member known for his distinctive, husky voice is also currently starring in the musical “Elisabeth” alongside Oak Joo-hyun. By Carla Sunwoo