A helpful voice on the other end

A helpful voice on the other end 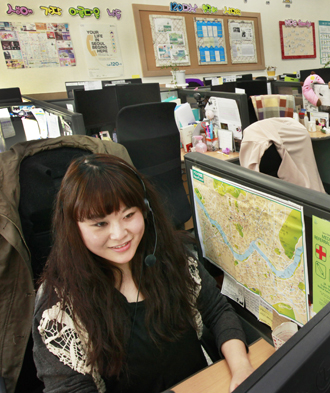 Yu Mi-sun, 27, an English-speaking telephone consultant at the Seoul Metropolitan Government’s all-purpose foreign language hotline, searches on the computer database to answer a call in the 120 Dasan Call Center, located in Dongdaemun District, central Seoul, on April 12. By Park Sang-moon

This is part 2 of a 2-part series about a call center in Seoul. Part 1 explored the domestic department of the service yesterday.

For both non-Korean-speaking residents and visitors faced with the limitations and frustrations of foreign language services available in daily life here - or lack thereof - dialing 120 + 9 connects callers in Seoul to services in five languages: English, Japanese, Mongolian, Vietnamese and Chinese. According to the call center, these languages are representative of the highest number of foreign residents living in Korea.

An English-speaking consultant Park Gwang-in, also known as Dave Park to callers, connected an extra headset to his computer for a Korea JoongAng Daily reporter to listen in on the calls on April 18 in the first floor office at the 120 Dasan Call Center in Dongdaemun District, central Seoul.

Unlike the 24-hour Korean service, Dasan’s foreign language service, available since November 2009, is offered from 9 a.m. to 10 p.m.

In the background, a consultant speaks Japanese, giving directions to a shopping district, while a Vietnamese consultant is engaged in a lengthy interpretation for almost an hour.

Park, 38, has been with Dasan’s foreign language service since its launch. He says he is not in the position to provide an answer to the Bangladeshi women’s question - why her husband’s visa application was denied. But he directs her to the Seoul Global Center’s immigration representative, who speaks English and is an expert on immigration services.

Dasan’s Korean hotline service, launched by the Seoul Metropolitan Government in September 2007, has integrated with the call centers of the 25 district offices, and has consultants who are trained to answer the questions of callers’ needs ranging from district office affairs to transportation.

The bilingual foreign language consultants get around 50 calls on average per day, half that of the Korean service counterparts. But each call often lasts a little longer than Korean calls, and they have to be versed in a wider range of scenarios.

Over two hours in the afternoon, several requests come in for taxi interpretation, two from different tourists looking for a spa, another from an English teacher moving out from his apartment who needs to get rid of his sofa. Park answers these questions promptly. But the calls in between are varying.

“I want you to translate a text message in English for my fiancee,” says the next caller in Korean, though he dialed the English service. His fiancee is Filipino, and their marriage was apparently arranged by an international marriage broker. “I want to tell her, ‘Don’t trust the agency’s boss too much.’ I don’t want her to be too friendly with him. When I met with him last time, I drank coffee he gave me and felt really strange afterwards. I think he put drugs in it.”

Park replies gravely, though unfazed, “I can translate the message for you. But I think you need to communicate with authorities who can better help you on the issue, especially if drugs are involved.”

Foreign language consultants also have to fend for themselves when angry and ill-tempered people call in. Sometimes people simply complain, “I hate Korea.”

Some take out other frustrations on the call center. Yu Mi-sun, 27, worked as an English-speaking consultant for almost two years. She recounts an incident which occurred several months ago. A female English teacher called the center because she needed an interpreter for McDonald’s delivery. But McDonald’s was not delivering that day because of the snow.

“Then she began swearing and said, ‘I’m going to kill you.’?” Yu said. “She grabbed a taxi and actually came to the call center to complain in person to the foreign language service team manager.”

The foreign language service staff, because the office is smaller than the domestic department, has strong camaraderie. Foreign language consultants work 13-hour shifts every other day.

Park spent three years in Buffalo, hence his fluency in English. Unfortunately for the single ladies in the office, Park, who is one of the few male consultants at the center, is a married man. “My coworkers don’t really see me as a man anymore,” he said with a chuckle.

While calls to the English line vary the most, and the Japanese line gets a lot of tourists, many calls to the Vietnamese, Mongolian and Chinese operator are from foreign women concerned with international marriage procedures or from migrant workers who have difficulty communicating with their employers.

Jadamba Magnaibayar, 37, spent two hours in the morning interpreting for a migrant worker whose mother had passed away. His employer wouldn’t let him go back home to Mongolia for her funeral. “She’s already dead, isn’t she?” his employer told him.

Magnaibayar has worked in the Dasan foreign language service division for two years. She moved from Mongolia to Korea five years ago after marrying a Korean man and is currently a permanent resident.

There is one case which still haunts her.

“A 25-year-old Mongolian woman called and said, ‘I wrote all the songs in the world. Why did everybody steal my songs?’?” Magnaibayar vividly recalls the conversation because she realized that the woman was psychologically disturbed. “She asked, ‘If I get the royalties from the songs, do you think I can earn a lot of money?’?”

The woman married and moved to Korea a year ago. She couldn’t find employment, and had difficulty communicating with her husband, who was 20 years older than her. “She was having problems with her marriage. She called me frequently.”

Her child eventually became sick, but the woman’s husband told her, “The child is sick because of you. I’m going to have you arrested.” The woman was being beaten by her husband. She always had to call in secret because her husband didn’t buy her a cell phone. Over the months, Magnaibayar helped the woman get in touch with various organizations specializing in aiding women in multiethnic marriages.

“One day, she called me from the police station. She said, ‘Unni [older sister], I stabbed my husband. You will take care of my daughter, right? You have a child, too.’?”

Magnaibayar has not heard from her since. She believes the child was last in the care of the Seoul Metropolitan Children’s Welfare Center. “But I don’t even know if the child is alive anymore because she had been so sick.”

“Sometimes, I feel so frustrated that I can only answer through the phone. I feel like if I can be physically there, I will be able to do so much more,” Magnaibayar said, a tremor in her voice.