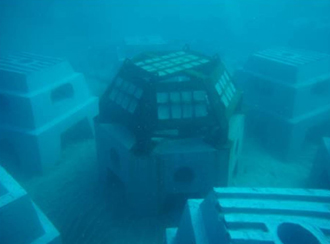 Tritons made of steel residue are installed in waters 13 meters (42 feet) deep off Geomun Island near Yeosu in 2010.

YEOSU - At the entrance of steelmaker Posco’s pavilion at the Yeosu Expo Complex, a statue dubbed “Triton Sea Forest” awaits millions of visitors from outside Korea when the international exposition opens next month.

The steel giant fancies itself as a patron saint of the sea. As such, it has developed new fishing reefs in the waters off the host city of the international exposition as part of its much-flagged conservation efforts.

Posco plans to promote itself as an eco-friendly steelmaker to 105 countries and an anticipated 8 million visitors at 2012 Expo Yeosu Korea, which will run from May 12 to Aug. 12 under a marine and coastal-protection theme.

“Ordinary people who just see Posco as a steel manufacturer will get a fresh image of the company as being cleaner, greener and more caring about people and the environment,” said a public relations official at the Posco Pavilion. The three-story exhibition building was designed using motifs associated with sea mollusks. It also features a large human ear “listening” to the needs of the ocean.

Two years ago, Posco parachuted 510 artificial fishing reefs made of slags in a 1.4-hectare (3.4-acre) and 13-meter-deep (42-feet) fishery in the waters off Yeosu’s Geomun Island with the aim of helping restore the crippled local marine ecosystem in line with an MOU it signed with the Ministry for Food, Agriculture, Forestry and Fisheries.

Dubbed Tritons after the Greek sea god, the steel-derived structures look like they are made of cement but actually contain high levels of calcium and iron, which are essential for photosynthesis and the formation of protein. This means they can nurture seaweed and other marine life. 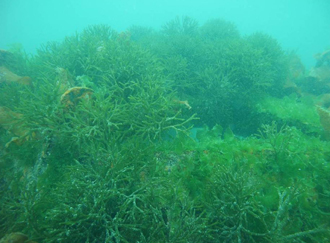 Sea grass is seen growing on Triton fishing reefs two years after they were dropped onto the sea bed, creating what Posco calls a “sea forest.” Provided by the company

Slags are byproducts or residues of smelted ore that become separated during the steelmaking process.

The steelmaker claims the fishing reefs in the area are now 10 times larger than they were before, representing the fruits of 10 years of research by its staff. Moreover, healthy sea life is growing around the artificial reefs, according to a recent investigation by the Research Institute of Industrial Science & Technology (RIST). The artificial reefs can contain up to 30 kilograms (66 pounds) of seaweed per square meter, Posco said. Seaweed absorbs carbon, meaning it can help lower carbon dioxide levels in the area.

“Steel slags are rich in iron and calcium in comparison with natural rock,” said Kang Kwang-sik, a researcher at RIST. Iron promotes the growth and habitation of seaweed, plankton and other marine life, while calcium helps purify water by removing contaminants, he explained. A one-hectare “sea forest” of Tritons can absorb up to 15 tons of carbon dioxide (CO2) a year, Kang said.

The steelmaker has so far created 12 such sea forests in this way in areas including Namhae, in the southern part of the country, and Pohang, North Gyeongsang. It plans to add two more this year. It will later expand its marine recovery activities into waters off Indonesia, it said.