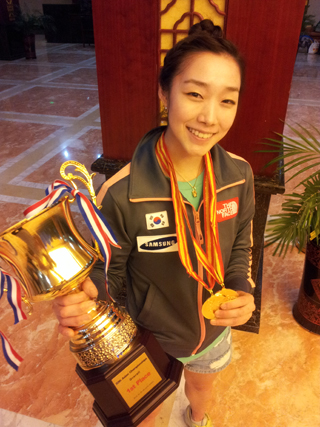 Kim was the only one out of 18 competitors to finish all routes in the discipline, in which the climber who reaches the highest point on the 15-meter (49-foot) wall in a given time wins.

Kim had already clinched the bouldering event on Thursday, edging Renqing and Hung Ying Lee of Chinese Taipei. Bouldering requires climbers to complete five 5-meter-high walls. The person who finishes the task in the fewest number of attempts wins.

With these titles pocketed, the 24-year-old also emerged as the all-around victor at the Asian Championships. This distinction is handed to the climber who amasses the highest evaluation in all three events - lead, bouldering and speed.

“I’m amazed that I’ve now won eight consecutive times,” Kim said through her agency, All That Sports. “I’m happy to have got a good result and I feel especially good about completing all the routes.”

Kim got the season off to a promising start by clinching bronze in the bouldering event at a World Cup series in Chongqing, China, on April 14. She will return to Korea tomorrow to attend the National Sports Climbing Championship - a national team qualifier -on Saturday and Sunday in Mokpo, South Jeolla.

“As I have to participate in other events in early June, I need to focus more on maintaining my form,” said Kim, the current world No. 2. “I’m enjoying a good start to the season, but I want to climb better in other big competitions.”

Kim, a Korea University student, was recently named on a list of 50 mountaineering greats by the Korea Alpine Federation that also included Ko Sang-don, Park Young-seok and Um Hong-gil.

Kim is the only female on the list who is still competing. The two others, Ji Hyun-ok and Ko Mi-young, both died in climbing accidents.